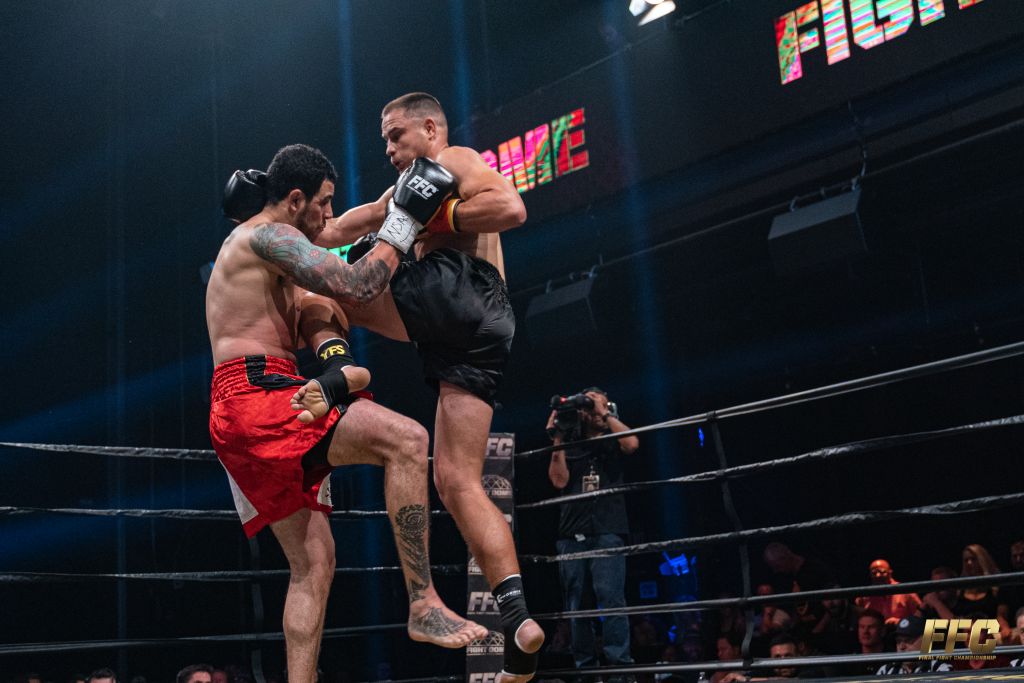 The sixth instalment of the Final Fight Championship calendar produced another epic night of combat sports at the sold out Fight Dome at the Caesar’s Rio Hotel and Casino.

For those in attendance, eight fights with two of those for FFC Titles split across three disciplines, with fighters descending on Las Vegas from five continents across the globe. The action didn’t disappoint, with three knockouts, one submission and some truly unforgettable bouts.

Egli’s skillset is clear in his ability to submit opponents, holding a black belt in jiu-jitsu and having ten of his twelve victories coming by way of submission. Lemminger’s game plan was clear from the offset; to keep the fight standing and avoid the grappling exchanges with the champion.

Lemminger executed the plan perfectly, out striking the Oregon man and dropping the champion on multiple occasions en route to a wide unanimous decision in his favour. Egli had his moments, but ultimately couldn’t get the fight to the mat for long enough to threaten the challenger.

A new champion was crowned, with Mark Lemminger claiming the FFC Welterweight Championship, leaving Ben Egli to go back to the drawing board.

Ukrainian kickboxing sensation Mykyta Chub continued to demonstrate his strong grip over the middleweight division with a brutal knockout of Brazil’s Wellington Uega.

Chub scored the first knockout of his FFC career in the fourth round, with the Brazilian knocked out despite enjoying some success earlier in the bout. ‘The Volcano” makes another successful defense of his crown, and has recently called for a bout with welterweight king Shkodran Veseli, in pursuit of becoming a two-weight champion.

A touted title eliminator between Jason Witt and Roberto Neves went the full distance with the bout a total back-and-forth and point deductions coming on both sides. A close affair was made even more tantalising in the third round, with Witt first being deducted a point for a groin strike, before Neves evened it up by grabbing the ropes during his opponent’s takedown attempts.

Witt was victorious on the judge’s scorecards on his promotional debut and will look to target a rematch with current champion Mark Lemminger, with Witt the only man to have defeated the Wisconsin fighter.

Alex Polizzi and Daniel Jolly had a one-round barnburner, with Jolly dropping Polizzi twice early on, before Polizzi took the fight to the canvas and landed significant ground and pound, forcing the referee to intervene with just under thirty seconds left in the round.

Polizzi moves to 5-0, whilst Daniel Jolly left his gloves inside the ring, retiring from the sport in an emotional message to those in attendance.

The stock of Max Rohskopf continues to rise, after yet another dominant victory over Contender Series alumni Zach Zane.

Zane, who held a 13-8 record compared to Rohskopf’s 3-0, took this fight on just four days notice. Max, continued his dominance of any opponent in the Fight Dome by slamming Zane on his back, before submitting the Hawaiain with a rear-naked choke in just over one minute.

Rohskopf moves to 3-0 in FFC, and continues to stake his claim as one of the best prospects in mixed martial arts. Who’s next for the prodigy?

Heavyweight boxing contender Kubrat Pulev and hall-of-famer Kevin Kelley were in attendance and Mailata didn’t disappoint, flooring Franco with a flurry of hooks and uppercuts  ending his Vegas’ debut in spectacular fashion.

Keoni Diggs outpointed Bryan Nuro to maintain his unbeaten record on his FFC debut. Diggs outpointed and damaged Nuro across three rounds, with Nuro game to brawl as a short-notice replacement.

Jeff Roman scored a huge scalp of Jamil Ibragimov in the opening bout of the evening. Tipped as a big favourite, Ibragimov struggled to deal with the pressure that the Vegas man brought early in the fight, also breaking his hand in the opening round. Roman claims a big victory and makes a huge impact on his promotional debut.

Heavyweight Boxing: Patrick Mailata def. Daniel Franco via KO (punch) after 1:04 of Round 1.