Poturak: I eat two kilos of meat every day 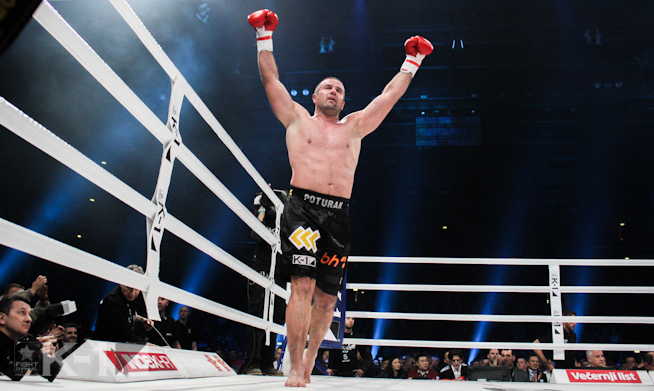 Dzevad Poturak is no doubt one of the most interesting fighters from this region, but this comes as a small surprise, considering he's the best kickboxing fighter in Bosnia and Herzegovina.

Many people will always remember the incident at the recent K-1 WGP Final in Arena Zagreb with Poturak in the starring role, jumping in as a replacement in the semifinals, almost literally from a restaurant seat.

“I was just ordering pizza for my crew when I heard a call and then rushed to the locker room. We ran from the arena’s second floor through the crowd toward the ring, it was all like in a movie,” he recounted what happened in an interview with scena.hr.

Fighters’ nutrition is always an interesting subject, and this is how it goes with Poturak… “I eat a kilo and a half of meat, a mountain of rice and olives every day. Afterwards, I throw in something like 20 pieces of cevapi [local meat-based fast food] and take ten more to go,” Dzevad revealed.

Even though there is still some way to go – three months, to be precise – until his farewell fight as part of the FFC event in Sarajevo, there are already indications that the camp will be very tough to go through. “Six hours of training each day, no letting loose, especially in the last 21 days before the fight, it’s all airtight then.”

“My opponent is Stefan Leko, he’s a fighter from a true K-1 guard, the man who’s been through it all. I know it won’t be easy, but I’ll get ready like a BH Machine!”

Poturak wasn’t the one to miss adding his two cents about the main topic for every martial arts fan these days. It’s, of course, Anderson Silva’s defeat and his loss of the UFC title. “A lot of people are now badmouthing Anderson after the fight, but I wonder what their reactions would’ve been like if he had once again won that way he fought. He would’ve been king,” Dzevad is convinced.

Tucak not too thrilled about his FFC fight in Sarajevo Croata: My goal is to smash Bakocevic, but first I need to win in Sarajevo