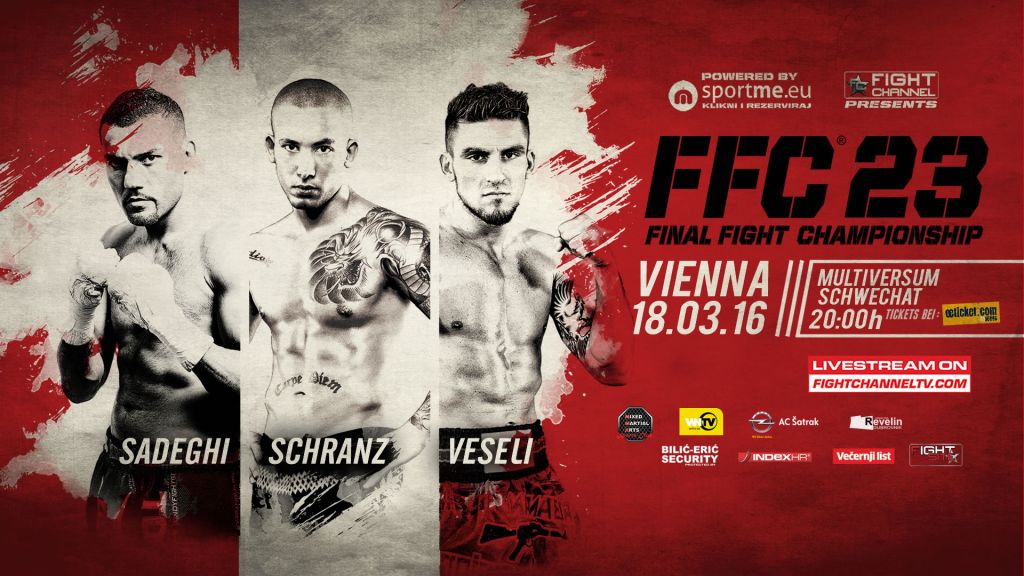 After a truly spectacular FFC event in Athens, this Croatian fighting sports promotion is hard at work preparing its upcoming spectacle in Vienna, Austria. FFC 23 is to take place March 18 at Multiversum Schwechat with six top MMA and six kickboxing bouts.
Local Austrian audience will surely be pleased by the performance of local fighters and Viennese fighting sports stars. Philipp Schranz will fight in the main event of the MMA part of the show, while Foad Sadeghi and former FFC contender Tigran Movsisyan will headline the kickboxing part of the evening.
Cikotic back in the action
A kickboxing match that immediately draws attention is the one in heavyweight division between Enver Sljivar and Tomislav Cikotic. Cikotic just fought at FFC 22 in Athens where he lost via unanimous decision to Romania’s Sebastian Cozmanca. Therefore is it logical that he will try to seek to return to the winning streak. Sljivar already fought in the FFC ring against Croatia’s kickboxing veteran Igor Mihaljevic and won via decision. It will be a match between two dangerous KO artists with a potential highlight knockout!
Another interesting match-up will also be the one between Austria’s Manuel Sembera who is to face FFC Futures champ Jasmin Bajrovic from Croatia. This match was already scheduled for FFC in Zagreb, Croatia, but Sembera sustained an injury and was thus replaced by Jasko Memisevic. Bajrovic also suffered a tough defeat in Athens last month and he will definitely do his best to win at FFC 23. However, Sembera will try to do the same since this will be his FFC debut and he will fight in front of his hometown audience.
Despite the fact that he was originally to fight Albania’s Shkodran Veseli for the title in the -77 kg division, Holland’s rising star Eyevan Danenberg got a new opponent – Ayub Gaziev. Danenberg is still undefeated in the FFC ring and he is especially remembered for his amazing match with Stevan Zivkovic in 2015.
However, it will only be a warm up for the spectacular kickboxing main event featuring Foad Sadeghi and Tigran Movsisyan. This Viennese legend was to fight Glory’s Teo Mikelic who unfortunately sustained an injury and was forced to back out. Instead of Mikelic, Sadeghi will now fight former FFC lightweight contender who lost in his last match to Samo Petje.
The fact that Sadeghi got a new opponent did not make it any easier for him since Movsisyan is the last to defeat Teo Mikelic. It was at FFC 19 in Linz when the Check fighter won via KO in the second round, meaning that Sadeghi is to face a real threat despite having more than 130 professional matches under his belt. A real treat for any fighting sports fan!
Schranz in the MMA main event
As already announced, one of the best Austrian’s MMA fighters Philipp Schranz (15-7) is to fight in the main event of the MMA part of the program. His opponent will be one of the best England’s featherweight fighters James ‘Job Done’ Brum (17-3). Schranz made his FFC debut in Vienna at FFC 16 when he defeated Slovenia’s Lemmy Krusic and secured himself another match in the FFC.
Senyei vs. Gluhak in inaugural -77 title match
When it comes to other FFC title matches, Hungary’s Laszlo Senyei and Croatia’s Ivan Gluhak will decide on the new welterweight champion in the MMA part of the event. The two already fought at FFC 5 in Osijek, Croatia in 2013 when Gluhak dominated the entire match only for Senyei to make a twist in the end and finish the match in only few seconds via armbar. It was only one of the five wins Senyei scored in the FFC ring and he definitely deserved this title shot. On the other hand, after losing to this Hungarian fighter, Gluhak scored a series of wins and excellent results in 2014 and 2015 so it is not surprising at all that the FFC match makers decided to give him a new chance to reach the top.
Another interesting MMA match will be the one with Viktor Halmi and Dagestani contender Ramazan Sulebanov. It will be Halmi’s first title defense. Halmi was to defend his belt for the first time last year in Zagreb when he lost to Ivica Truscek. However, his title was not at stake since Truscek failed to meet the weight. Halmi is otherwise known as a tough fighter who never failed to deliver a great performance.
Banovic and Bilic ahead of difficult task in front of their hometown audience
Another Austrian fighter with Croatian passport, Manuel Bilic, is to fight Hungary’s Adam Borics. They both have same score (2-0) and the winner of this match will definitely continue to pace towards the top of the division.
Excellent Darko Banovic will enter the FFC ring again and fight Joey Kuiten. Banovic already left his mark in the FFC when he defeated Matija Blazicevic.
Watch FFC 23 live on www.fightchanneltv.com.

Tigran Movsisyan: ‘I will beat everyone on my way to the title!’ Philipp Schranz ahead of his FFC 23 match: ‘Brum will experience something he never experienced before’