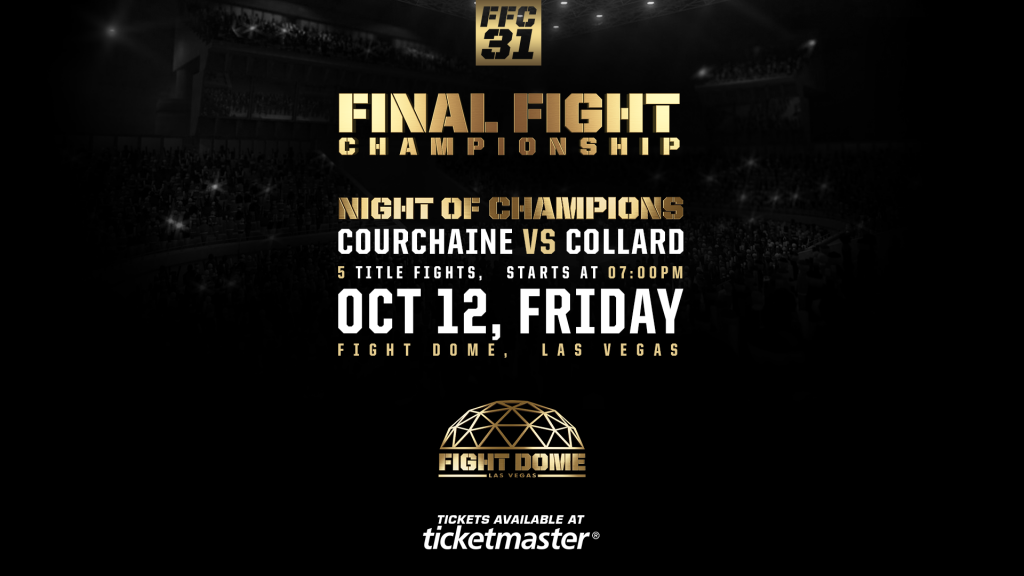 LAS VEGAS, NV, (Oct. 1, 2018) – The main event is set for “FFC 31 Night of Champions” and it will consist of two rising stars in Mixed Martial Arts as Clay “Cassius” Collard (16-7-1) of Price, UT, battles Dave “Insane” Courchaine (20-7-0) of Cheney, WA, for the FFC MMA Lightweight Championship at the all-new Fight Dome Las Vegas at the Rio All-Suite Hotel and Casino.

After suffering two straight losses under the UFC banner in 2015, Collard returned to MMA in 2018 and responded with two straight victories, a TKO win over Troy Dennison, and a submission win (by triangle choke) against Carson Gregory.

As for Courchaine, he was on a five-fight win streak dating back to 2014 before losing to Arthur Estrazulas by 1st round KO in January of 2017. Both fighters are hungry and both fighters have something to prove when they step into the ring on Oct. 12.

There will be one other MMA title bout on the “Night of Champions” as Ben Egli (10-2-0) of Tigard, OR, takes on Brazilian, Roberto Neves (10-3-0) for the FFC Welterweight Title. The remainder of the multi-discipline fight card will consist of championship bouts involving boxing and kickboxing.