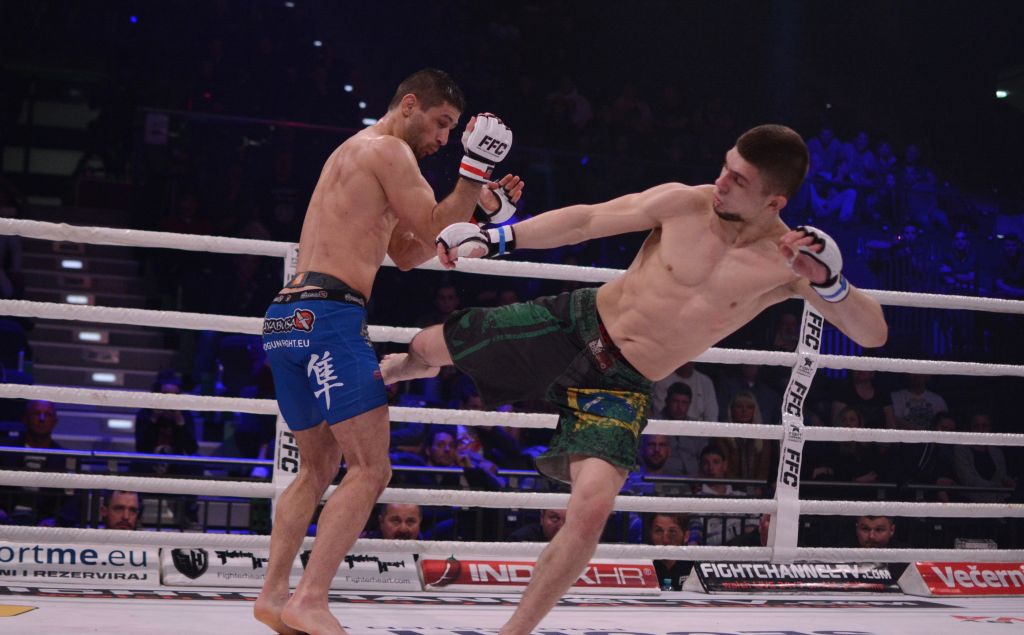 In a relatively short period of time, Ahmed Vila become one of the most prominent FFC names. This 20-years old fighter from Sarajevo left quite a big impression after only two matches in the FFC and he attracted a lot of fight fans’ attention.

In March last year no one knew about Vila when he stepped up in a title match and dethroned Viktor Halmi, FFC lightweight champ at that time. After that win, Vila vacated the title and dropped to featherweight where he fought Filip Pejić in a title bout. It was the biggest challenge of his career and the defeat he suffered did not discourage him at all. It only pointed out that there are some changes to be made if he wants to avoid the same scenario in the future.

On April 22 Vila will show himself in a new light, as a better and more experienced fighter, when he faces Slovenia’s Tilen Kolarič at FFC 29 in Ljubljana.

“I still live in Sarajevo, but I do my preps in Stockholm where I develop my skills a lot every time I come. I feel great here and they treat me like a family, they help me in every aspect of the fight. But the approach is very different in Sweden and people here respect athletes a lot. Unfortunately, our efforts are not recognized in Bosnia and Herzegovina and people are forced to go to other countries to do what they love. I hope that will change some day.”

You last match took place at FFC 26 when you fought Filip Pejić. What did you learn from that fight and what changes did you have to make in order to avoid the same mistakes?

“After losing to Pejić I realized I have to do more strength trainings and that I have to get more muscles if I want to fight in -66 kg. I mostly improved mentally but I also improved in all segments of MMA. And when it comes to that, I mostly worked on boxing and I think this difference will be highly visible. I also improved in wrestling. Well, I improved in all segments, but mostly I worked on strength and stamina. I think this will be very useful in my future matches.”

How did you deal with your first defeat ever?

“As far as I’m concerned, the defeat was no big deal. People make a big drama out of it. I’m simply above that. I became better, I improved mentally and physically and I moved on. That’s behind me now and it’s not important anymore. I’m much better now than I was then.”

In your two FFC bouts you fought in two different divisions. Is the featherweight division the one you plan to continue to fight in?

“Featherweight division suits me better. I’m too short for lightweight.”

What about your next opponent?

“I did not study him too much. That’s my coaches’ job and he is in charge for the game plan and my next opponent. I’m not afraid of anything and I will do everything to win.”

Who are you working with this time and what do you preps look like?

“I trained for three weeks in Sarajevo at CSPR GYM with Vanis Zuković when it comes to strength and conditioning. I also trained with my team in Pretorian and now I’m in Sweden getting ready at Allstars with Reza Madadi, Ismail Naurdiev and Frantz Siloa, who is a multiple BJJ world champ. I also train with Andreas Michael, Alexander Gustafssons’ head coach. I spar with Europe’s best and I think I will be ready for all three rounds. But my goals is to finish my opponent sooner.”

What about your future plans in the FFC?

“My goal is to beat everyone in this division and to fight Pejić or anyone else who will have the title at that moment. Most of all, I do not plan to lose again.”