Senyei after his rematch with Gluhak: The result was the same, but the fight was not! 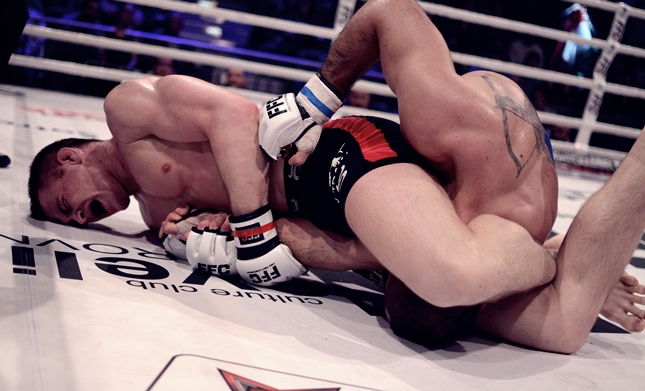 Less than a week ago Laszlo Senyei became the first FFC welterweight champion. On his way to the title, he had to defeat Ivan ‘The Braveheart’ Gluhak in their rematch.
Laszlo Senyei rose as a real MMA threat and, in a way, he is the FFC ‘product’ – from his professional MMA debut and match with Gluhak in 2013 to becoming the FFC champ in Vienna. This is the story of this Hungarian fighter who was visibly moved after the last victory when he asked the FFC leaders to make it possible for him to defend his title in his hometown of Budapest.
The proud champ revealed how he felt in these first days after the big celebration, but he also remembered his FFC debut and his first match with Gluhak whom he respects tremendously.
‘I feel great. I only have some little casual injuries. But nothing serious. I will take off one or two weeks. I want to relax from the trainings and the fight. And I also have couple things to do. I was with my girlfriend and also with family and I met some friends but nothing special,’ said Senyei.
This success also brought him some popularity that he will now have to face as FFC champ. This talented Hungarian MMA fighter also noticed some changes when he returned to his homeland where all the media noticed his triumph. He also got a special recognition from the mayor of one of Budapest’s districts.
‘I think I became more popular and I hope it will be even better in the future. I got some followers and I set up the followers option on Facebook so if somebody interested in my carrer, don’t be shy and follow my page!’
Despite the fact that he is aware of his progress since they first fought, the Hungarian fighter is not completely satisfied with his performance against Gluhak.
‘I’m not satisfied at all and I got some bad feedbacks from the fight. So there are a lot of things I have to work on.  But on the other hand, the first time I met Gluhak in 2013 he clearly beat me. After 3 years I was the better one. The fight was not the same only the result was. I would like to wish him a quick recovery! He is really a breavehearted warrior!’

On the same evening Senyei’s colleague and a very good friend Viktor Halmi lost his belt to Ahmed Vila. Right after the event, Senyei revealed that he took Halmi’s defeat as his own and that his victory was bitter-sweet in the end.
‘He could better explain his feelings. I just have to say that I will be eternally grateful to Viktor. He has done so much in this sport.’
He also said he will be eternally grateful to his friend. He also thanked his sponsors, friends, family and girlfriend since and added that nothing would be possible without their help.

Adam Borics after his impressive win in Vienna: I feel I’m close to the title shot (VIDEO) James Brum wants to fight at FFC in the US: ‘At 135lbs there is no one that can beat me’