Risto Dimitrov: I will test Van Roosmalen on the ground, I believe I can beat him! 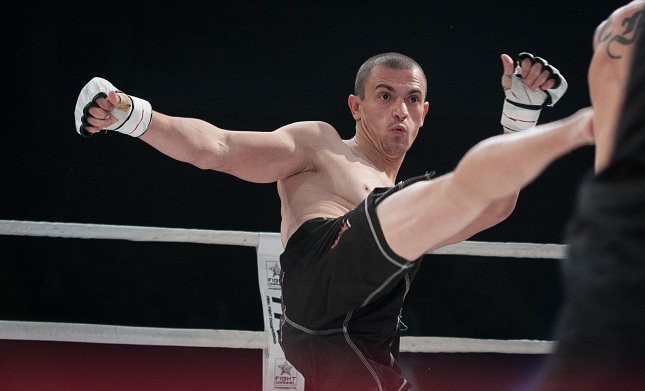 FYROM MMA fighter Risto Dimitrov got the honor to headline the MMA part of the FFC 28 event in Athens. This time he will try to beat one of the biggest names in fighting sports – Robin Van Roosmalen.

Dimitrov has already fought twice at the FFC and scored one win and one loss, but after that he did not enter the ring or cage again. However, he had a successful year in other martial arts disciplines, but now he is to return to where he feels the most comfortable at.

It has been a year and a half since your last FFC match that you lost to Manuel Bilić. Can you recall that fight?

Yes, I remember that match very well, especially because it was followed by mixed feeling from my part. When we landed in Austria, we received a message that a friend of ours passed away. So my coach and I travelled to Linz mentally broken.

But when it comes to fight itself, I think I had him. I could have won. I had him but he landed a back fist and I ended up on the ground. There I saw how I could pull a choke on him, but I did not do it well, he slipped and ended in full mount. I tried to get myself out of that position but he did GNP very well on me and referee Grant Waterman stopped the match. He did well. It was close to the end of the round and it’s my mistake I lost.

What have you been doing lately while you did not fight in the FFC ring? What results did you achieve and how did you develop as fighter?

After my loss in the FFC I dedicated myself to combat Sambo and I competed at the World Championship where almost all competitors were professional MMA fighters. I lost in eight-finals, but I’m satisfied with my performance since I fought with elite fighters. I also scored some successes in judo, grappling and jiu-jitsu and I also became the state champion in combat Sambo.

At the end of 2016 I fought in my hometown of Bitolj where I fought Montenegrin champ for ISFA belt in -66 kg division. I won via armbar in the first round. Now I’ve been in the middle of my preps for Sambo World Championship and when I received this FFC call I did not want to accept. But when I found out the name of my opponent, I could not say no.

Did you hope the FFC will call you soon? And what was your reaction when you found out you would fight in the main event against Robin Van Roosmalen?

I am excited and I am in great shape. I’ve really been working with top fighters. But this is MMA and everything is possible, despite the fact that Robin Van Roosmalen is currently one of the best K-1 fighters in the world. I’ve been following his career and I’m familiar with him. He is aggressive and precise. My advantage is the fact that this is MMA, not K-1. Different rules, different sport and I don’t think he is completely ready for MMA yet. I intend to use his disadvantages and score a win. He is very good, but he is not invincible. Plus, right now I’m in the shape of my life, both mentally and physically.

You are to fight one of the biggest names in combat sports, but he has little MMA experience. Do you believe he will be your toughest opponent so far?

Yes, I think he will be the biggest challenge I had so far. He is the best fighter I ever faced, but I think I could win. That would mean a lot to me and both to whole MMA scene in FYROM.

You’ve seen his previous matches. We all know his brilliant in stand-up. What about his ground game?

As every fighter that trains MMA and K-1, he is not unfamiliar with ground game, but this is not something you can learn overnight. We have not seen what he’s capable of on the ground, because he has not shown much yet. But I’m sure he’s training hard, as hard as I’m working on my stand-up. We’ll see what he can do. I know what I can do, for sure.

You would not accept this match if you thought you could not win. What gives you the confidence the most?

I believe I could win because he is not so experienced in MMA and this is what I train the most. I’m also very experienced in Sambo. As I already said, this is MMA and everything is possible.

What can we expect from this match? If you had to compare your style with somebody famous, who would it be?

You can expect an attractive and exciting match. The mere fact that I’m fighting Robin Van Roosmalen and that I have a chance to score a win over him is incredibly motivation. There will be brutal exchanges and it will be fun. That’s the most important thing. I have no doubt we will test each other both in stand-up and on the ground.

What do you think you could get by winning in such a match and at such an event?

FFC is the best European MMA promotion at the moment and this match will be a great promotion for me and honor for every fighter. It will be broadcasted live in many countries and via PPV, meaning that it will be available worldwide. This is a great honor for me and it all motivates me to win. I also know that many people in FYROM will eagerly follow this match. I know I have to win for myself and for all of them too!

Denis Marjanović: I hope Vrtačić does not plan to run around the ring Petje seeking retaliation at FFC 28: ‘I want to erase that stain’