Petje: “They doubted me. That’s why it’s even better!” 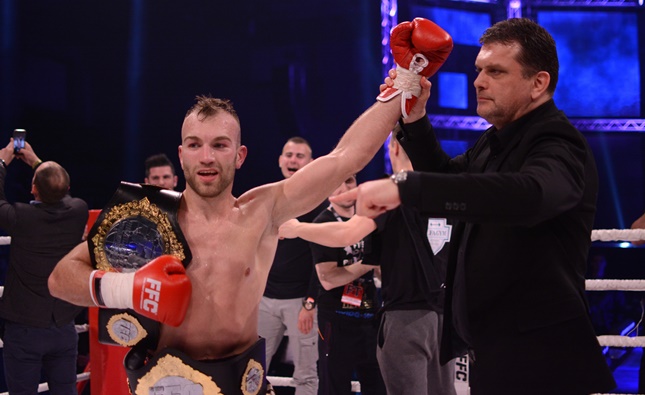 Samo Petje succeeded in an extremely difficult and ambitious plan; this Saturday in Ljubljana in front of his hometown audience at FFC 29 he became first FFC two-division champion. After winning the lightweight belt again in December 2016, Petje decided to put himself thought an additional challenge and to try to win the welterweight belt owned by Holland’s Eyevan Danenberg.

But what we saw in the ring proved completely opposite. Petje had an excellent game plan. He stormed, attacked, closed the distance and insisted on open exchange. And this was the only way to deal with opponent with better physical dispositions.

“Now the impressions settled. I won the welterweight belt this Saturday. I don’t know where to start. It was a tough fight and my opponent was excellent. But I scored another win and I became FFC‘s first two-division champ. I enjoyed the match and I knew it was a huge challenge. I’m happy to have great team with me and they supported me in the moments I needed them the most.

Danenberg is extremely tall. Even for his own division. And when we agreed on this match, most people doubted me. That’s why it’s even better! I noticed my opponent was under big pressure and he knew it would not be easy to fight me and to defend the belt. And I proved it. I would like to thank everybody who participated in my preps. I will now take a short break and then I have to face new challenges,” concluded Petje.

Hrvoje Sep: “Everything in FFC was perfect and I’m sorry my opponent did not show more courage” Samo Petje: “It was my friends’ idea”