Petje seeking retaliation at FFC 28: ‘I want to erase that stain’ 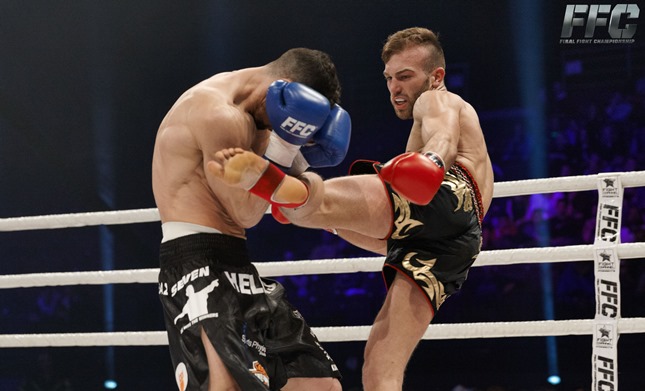 Samo Petje has finally got a chance to avenge the worst defeat of his career. Successful Slovenian kickboxer regained the throne of the FFC lightweight division two months ago after a win over Tigran Movsisyan that ensured him a rematch with Meletis Kakoubavas, Greek KO artist who brutally knocked him out a year ago.

While Kakoubavas had a longer break because of injury, as for other reasons, Petje scored two wins and got the opportunity to retaliate at FFC 28. Just like last year, Petje will fight on his opponent’s turf but it does not bother him at all.

“I know I made a mistake in the first match and fighting on his turf again does not change anything. It might be his advantage because he will come straight from his bed, but again, it could even be a bigger pressure because he has to prove himself in front of his hometown audience. I simply want to do this match because of myself, I want to erase that stain. I want to make it right because I know I’m better. I’m not gonna say it was a lucky punch, but I know my worth,” said Petje who already started to train less intensely to get proper rest before the event in Athens.

Coming back to Greece as the best version of himself

The champion believes his is only getting better and he proved it in his last match with ‘The Armenian Tiger’.

“I am satisfied with what I have shown in the match with Tigran, but see that I can still do better than that. In the third round it was obvious that I was out of rhythm, but I am satisfied with my performance. In the first round I was quite stiff, but I relaxed in the second round and did a good job. If I repeated the same in the last round, then I would certainly end the match via stoppage.”

Samo says that the heavy loss he suffered in his match with Kakoubavas left no damage on him and he is not even bothered to finish the match in the same manner.

“I do not care how I’ll win. I just want to win and I want to prove I’m better. I expect him to be ready and I know it will be a top fight. He is convinced that he will defeat me again, but I will show him he is wrong.”

How will he make sure the first match does not repeat itself?

“I haven’t changed anything, it’s all going as it should go. I think there is no point in making some dramatic changes now. I’m better prepared to answer his KO attempts and I adjusted my latest sparring to that.”

Despite the fact that they are not fighting for the belt this time, this match has a potential to be very attractive and this is why it was decided to be the main event. When asked if that will change his approach to this mathch, Petje was brief:

“Match as any other. You can expect an attractive fight I will definitely not disappoint you.”

Risto Dimitrov: I will test Van Roosmalen on the ground, I believe I can beat him! Darko Stošić getting ready for FFC 28 with boxer Stipe Drviš! (VIDEO)