Markus Ehrenhofer: ‘I will prove that Austrian athletes aren’t just good at skiing!’ 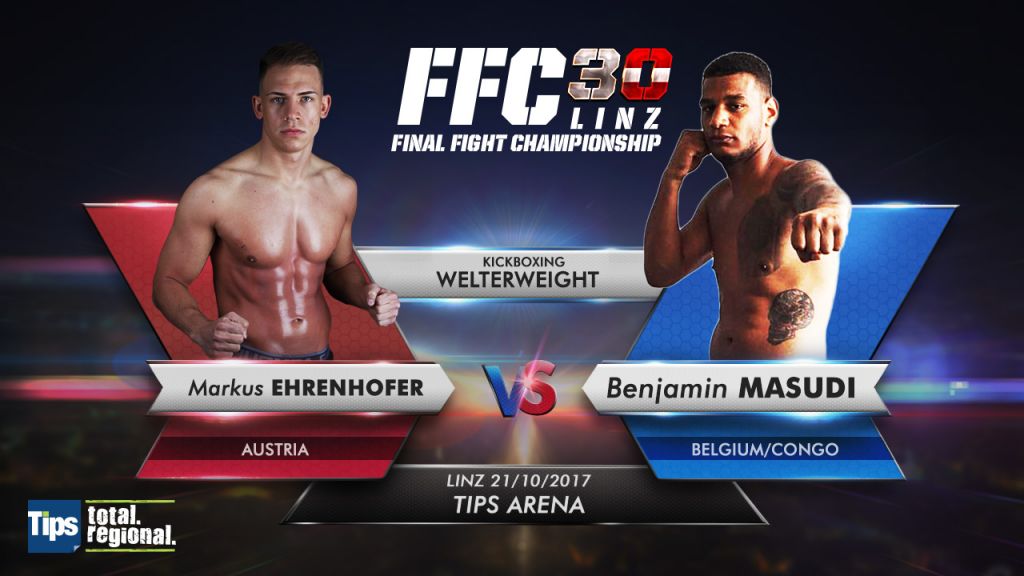 FFC 30 that is to take place in Linz, Austria, this October will feature a couple of exciting young Austrian prospect that got a chance to feel the lights of one of the biggest European fight stages. One of them is 22-year old kickboxer Markus Ehrenhofer who will face dangerous Benjamin Masudi (21-8-1, FFC 0-0, fighting out of Belgium/Congo).

Markus Ehrenhofer (18-4, FFC 0-0) is only in his early 20’s, but he already fought in 22 fights resulting in 18 wins and 6 KO’s proving his exciting and aggressive style.

‘It’s a funny story. When I was a child I’ve been a very good football player but I was a football player who wanted a little bit more action and I was also a little bit more aggressive. When I was 12 years old I stopped playing football and wanted to do combat sports, but my father said ‘No, if you want to fight, then you will also fight on the streets, in the parks or whatever’. So when I was 17 years old, I said: ‘So, dad, you can’t say anything now. I will start with boxing!’

At first I really just want to train a little bit of boxing but then I started with Thai boxing and from the beginning I went to the gym every day and after 5 months I had my first fight. So I really wanted to do combat sports since was a child and I also watched every WWE event,’ said Ehrenhofer and added: ‘I remember my first training very well. It was in my first gym where I started to train and my trainer there wanted to test me if I really want to do this sport. The fun factor was zero at this training but the next day I was back in the gym again!’

At FFC 30 October 21, Markus Ehrenhofer will lock horns with FFC debutant Benjamin Masudi. The two will open the kickboxing part of the event.

‘I don’t know very much about my FFC opponent but I have a message for him: ‘Keep your hands up because it will be a tough fight!’ It is always a very big pleasure and a great feeling for me to fight in front of people in my hometown and my eyes and focus are always set on gold! I think FFC is important because it shows people that combat sport isn’t like in the movies with illegal fights and in the underground. This is all very professional with doctors by the ringside and fighters respect each other,’ revealed this young Austrian kickboxing prospect who also has ambitious future plans.

‘My plans for the future are to become big international name and I want to show the world that Austrian athletes aren’t just good at skiing!,’ concluded Ehrenhofer.