Laszlo Senyei: FFC is my home, I want to defend my belt in Budapest 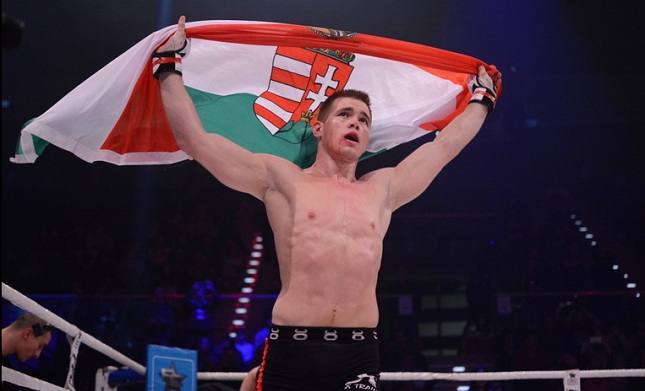 Last Friday Hungary’s Laszlo Senyei won the FFC welterweight title after his sixth win in the FFC ring and he would like to defend his title in his homeland.
In fact, Laszlo ended in the same way he began his FFC road, with a match against Ivan Gluhak. The two fought for the first time almost three years ago in Osijek when the young Hungarian fighter ended the match in the third round after visibly losing the bout. This was their rematch and the outcome was very similar. However, this time Gluhak did not dominate like he did the first time they met. After his win Laszlo stated:
“It’s a fantastic feeling. When I first started I did not expect that I could become a champion in such a large organization such as FFC. FFC is my home because I did all my fights except the first two here. My dreams are now fulfilled. Well, now it’s time to dream on. ”
It was interesting to hear his comparison of his first FFC match to this one when he won the title.
“When I first came to FFC, Ivan Gluhak beat me up properly, but I managed to turn this fight and I continued to dream. With every fight I dreamed more and it is finally fulfilled now with this victory and winning the belt. ”
He also added something about Ivan Gluhak whom he was in close relations ever since their first match and it seems they will remain on the same terms.
“Ivan Gluhak is a very nice guy and has my maximum respect. He is a true warrior who refused to tap until the last moment he believed in the victory. As for the fight, from the very beginning he was throwing bombs and forced me to move more. I was weak in the first round and after the break I started thinking. And then I managed to impose my style. When I managed to do so, I did what I had to do. I am not completely satisfied, but I am open to everything and I learn with every match.”
However, Senyei’s win was bitter-sweet since his friend Viktor Halmi lost his belt at the same event. The two failed to return to Hungary with two titles.
“Currently I have mixed bad and good feelings because my friend Viktor Halmi lost his belt. Until his defeat these were the most beautiful moments of my life, but we are so close, when he loses, then I lose too, but now there is a mixture of emotions. ”
Laszlo will now have to defend his belt. His opponent is not important to him, he has only one wish.
“My greatest wish is that the FCC comes to Hungary and to fight in Budapest in front of my fans, which were in very large number. Did you see all these fans here? They all came from Hungary.”

Senyei: FFC is my home, I want to defend my belt in Budapest Adam Borics after his impressive win in Vienna: I feel I’m close to the title shot (VIDEO)