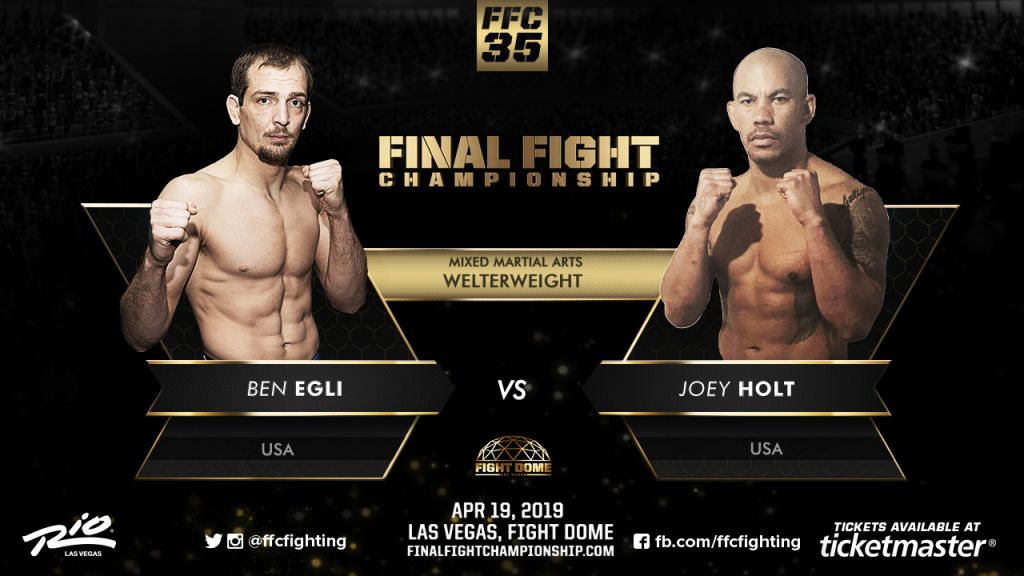 Joey ‘The Hitman’ Holt is set to fight Ben Egli in the main event of the upcoming FFC 35 that is taking place this Friday, April 19 at the Fight Dome in Las Vegas.

Holt (8-2 MMA) is making his MMA comeback for the first time since 2016 and will enter the FFC ring with five straight wins including two TKO’s, two submissions by Guillotine Choke and only one Decision win. Moreover, this 33 year-old one time Bellator veteran also earned the GOTC lightweight title in 2016 and has a 10-0 pro boxing record.

In his upcoming bout, Holt will make his FFC debut and will face a difficult task as FFC champion Ben Egli (11-2) is defermined to defend his title. However, Holt promises to dominate.

‘My expectations are to dominate the fight from bell to bell,’ said the fighter hailing from East Liverppol Ohio who claims he did not adapt his trainig camp for this bout and added: ‘I train to get better in every aspect of martial arts in every fight camp.’

When asked about his opponent, Holt said: ‘I know that he is primarily a Jiu Jitsu practitioner and he shows up to put on a good fight. My advantages are my striking and my wrestling and I predict a stoppage in the later rounds.’

Holt also revealed his future plans with Final Fight Championhip: ‘I heard FFC promotion is the fastest growing promotion right now and that they take care of their fighters. My future is to grow with the promotion and become the best fighter in the promotion.’