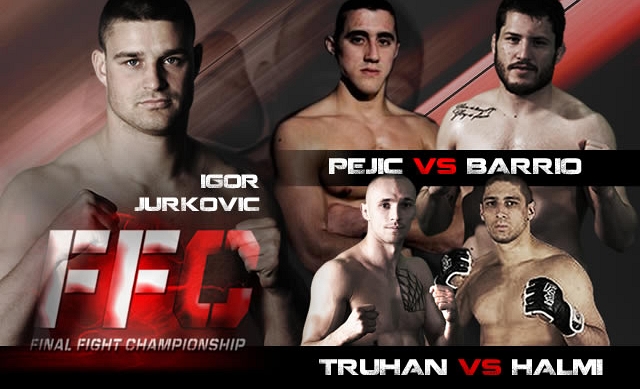 FFC 15 will be held in Porec, Croatia, November 21, while the FFC 15 spectators will have a chance to enjoy a full day of FFC Futures 4 program as well. This is the first time that Final Fight Championship promotion decided to put two events in one day and at the same venue. FFC 15 that will take place in the beautiful sports hall Zatika will include two inaugural FFC title matches. Igor „The Istrian Warrior“ Jurkovic will try to win the precious light heavyweight belt in the kickboxing part of the event, while Matej Truhan and Viktor Halmi will fight for the lightweight MMA title.

Due to technical reasons, Final Fight Championship decided to put two events in one day. The remaining 4th edition of FFC Futures will as usual start in the morning with some 80 kickboxers and MMA fighters who will try to win the tournament and earn a shot in the finals. However, unlike before, the finals will start at 5 PM and by 8 PM names of the participants of the Super Finale will be known.

"Do Koske" and Halmi fight for title, „Croata“ vs. Pejic

Matej “Do Koske“ Truhan from Zagreb, Croatia, and Hungarian fighter Viktor Halmi will fight in the inaugural FFC lightweight category match in the MMA part of the event. Thus this match will replace the one between Francisco “Croata“ Barrio and Vaso Bakocevic that many fans waited impatiently. However, the FFC leaders did their best to replace this match and raised the bar even higher. The co-main event will include “Croata's“ new bout. He is to fight Croatian MMA star and MMA League champion Filip Pejic who will fight in the FFC for the first time. Despite the fact that it is not officially confirmed yet, the winner of the match will become new featherweight title challenger. So far “Croata” gained many fans during his first two FFC matches, while his last victory over Patrick Peresa was especially impressive. Still undefeated Pejic will definitely face the most difficult challenge so far.

Another excellent Croatian fighter with impeccable score will have a difficult task on his way to the championship. In Porec, Matej Batinic will fight Nicolai Salchow from Germany. The fighter from Zagreb has a perfect score of 4-0. However, Salchow is also so far undefeated in his professional career and has a reputation as one of the best German fighters in light heavyweight division. In case Batinic wins, he would become the first candidate for the inaugural FFC title in his division with includes really though fighters such as Sakara, Browarski, Sanchez, Perak, Bekavac and Prachnio.

Ruben “The Viking“ Wolf, who landed one of the most brutal KO's in the FFC history, will also fight at the upcoming event in Porec. His opponent in Zadar Sasa Milinkovic last spring learned how it feels to get KO'ed by a soccer kick, while this KO earned Wolf big popularity and many views on YouTube and social networks. However, this time Wolf will face the best Bosnian heavyweight, Ivo Skopjak. This very promising young fighter has six victories and one loss in his professional career.

Vrbinc seeks revenge in a match against Senyei

Another match in welterweight division will also spice up the spectacular list of MMA fights. One of the big FFC's surprises, Laszlo Senyei from Hungary, will fight against one of the best Slovenian welterweight category fighters, Primoz Vrbinc. This bout will be especially charged because Vrbinc will seek revenge for the defeat he suffered from Senyei's coach and colleague, Viktor Halmi. Primoz spent last couple of months recovering from the eye injury he sustained in that match, but now he is determined to return to the winning path and revenge his sole defeat in the FFC. In case Senyei wins this match, he will surely become one of the candidates for the FFC welterweight title.

The MMA program at FFC 15 will include other two excellent matches worth mentioning. Ivan “The Braveheart” Gluhak will try to score his third FFC victory in a match against Stanislav Kanchev from Bulgaria, while Patrick Peresa will face Slobodan Maksimovic who will step into the FFC ring for the first time.

Jurkovic in a title match on his home ground

As previously mentioned, Igor Jurkovic from Porec will headline the kickboxing part of the event in a light heavyweight title match. His original opponent was supposed to be Fred Sikking, his co-fighter from Glory, but he cancelled his appearance due to injury and change of the date. The name of Jurkovic's opponent is not yet revealed, but there is no doubt Igor will attract numerous spectators from his hometown. It should be stressed out that the “The Istrian Warrior“ has never been defeated in the FFC ring and he has so far defeated fighters such as Catinas, Kemayo, Tavares and Poturak. Therefore, Igor definitely deserved the title shot.

FFC champion Samo Petje will fight in the co-main event in Porec in which he is to defend the title he won in Ljubljana. He is to face dangerous fighter from Slovakia, Milan Pales, who has an excellent score. After spectacular defeat over Teo Mikelic and winning the first FFC belt in his division, the FFC leaders decided to give Petje another difficult task very soon since he soon became extremely popular in his home country of Slovenia, but in the whole of Europe as well.

One of the most interesting matches in the kickboxing part of the event will also be the one that includes former SuperKombar champion Sergei Lascenko. The Ukrainian fighter is back on the winning track with excellent results. This time his will fight against Poturak's student and one of the best Bosnian heavyweights, Elmir Mehic. It will be a big test for both of them since it will show whether Lascenko really got back to the winning streak and whether Mehic is ready for another step forward in his career.

As expected, Igor Jurkovic's gym colleague as well as one of the best FFC light heavyweight fighters, Mladen Kujundzic, will also fight in the FFC ring in Porec. Mladen started his excellent winning streak two and a half years ago at Cro Cop Final Fight and ever since then he scored a couple of amazing victories and suffered no defeat in the FFC. This time he will fight against Oleksandr Bodruchin from The Ukraine.

The Bosnian audience is surely impatient to see the match between Denis Marjanovic and Mesud Selimovic. The both fighter lost in their FFC debut appearances, but they both fought well and definitely deserved a new chance.

FFC explosion in Vienna: Guelmino vs. Perak, Sakara vs. Browarski, Shkodran in a title match! Dorijan Ilic returns to the ring at FFC Super Finale in Opatija!