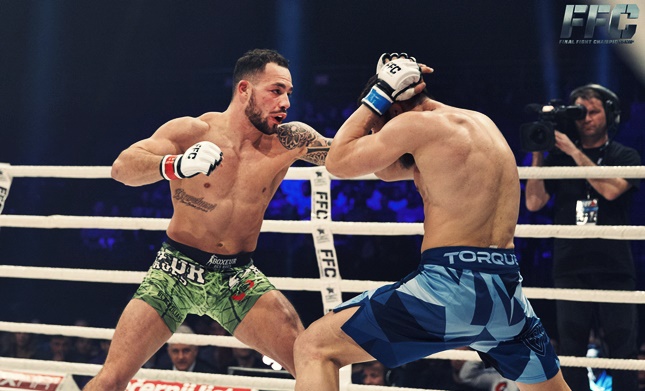 The name of Robin Van Roosmalen’s opponent for the upcoming FFC 28 in Athens, Greece, has finally been revealed! This Dutch kickboxing superstar will face one of the best FYROM MMA fighters – Risto Dimitrov.

Van Roosmalen made his FFC debut exactly one year ago also in Athens at FFC 22. In this match Van Roosmalen spectacularly KO’ed his opponent in the second round. Now a year later, he will lock horns with an equally dangerous fighter with two FFC bouts under his belt.

Dimitrov made his FFC debut in 2013 at FFC 10 in his hometown of Skopje when he defeated Greece’s Giorgos Vardis via unanimous decision. In 2015 he was not that successful losing to Manuel Bilić at FFC 19 in Linz, Austria.

The match between Van Roosmalen and Dimitrov is set for catch weight (69 kg). It will also be FFC 28 main event.

For entire FFC 28 „Greece vs. Rest of the World“ fight card click here.

FFC 28: Middleweight champion Denis Marjanović vs. undefeated Andi Vrtačić Ivan Bilić on his game plan for Danenberg: “I must not be an easy target”