FFC 34 Main Event Will Be Packed With Action 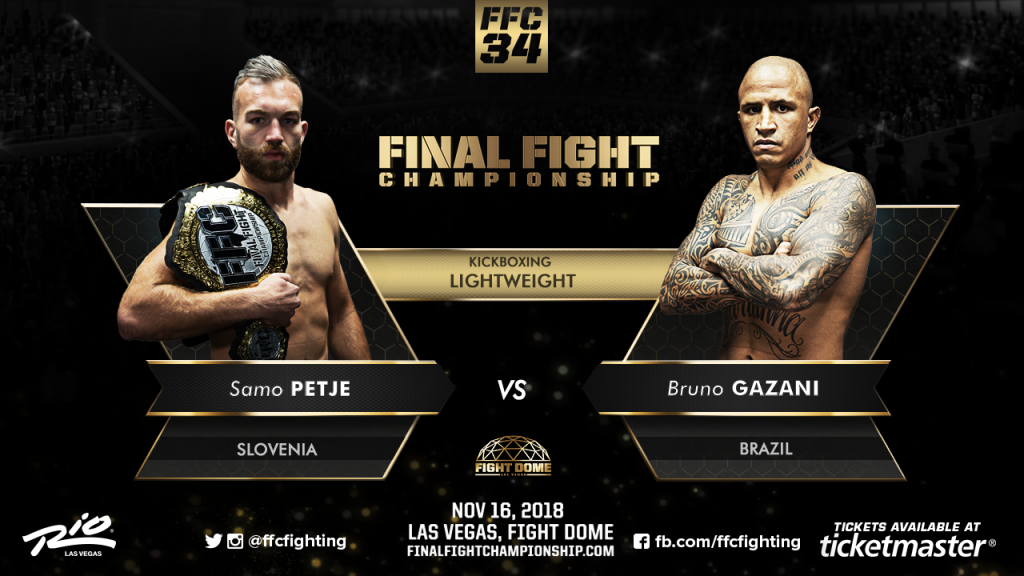 Las Vegas, NV, (November 15, 2018) – The fight has happened yet and it is already a candidate for ‘fight of the night.’ Two kickboxing veterans are expected to send Fight Dome Las Vegas into a frenzy on Friday night.

Bruno Gazani (60-6-0) of Brazil will take on the defending champion, Samo Petje (35-6-1) of Slovenia for the FFC Lightweight Kickboxing Championship in the Main Event of “FFC 34”, which takes place Friday, November 16th at Fight Dome located at Caesars Entertainment’s Rio Las Vegas.

Arguably the best Kickboxer in all of Brazil, Gazani will bring his powerful boxing skills into the ring on Friday, in an effort to show Petje that he (Gazani) is the true knockout artist.

Gazani is excited for the opportunity to fight for FFC in Las Vegas and he is promising that he will not disappoint the fans.

“I will put on a good show Friday night for the Fight Dome combat sports fans,” said Gazani. “I am going to deliver my very best and try to bring the title home to Brazil.”

As for the champ, Petje, he is confident that his Thai fighting style of solid kicks and knees will wear down Gazani and allow for an explosive knockout victory in Friday night’s title defense.

Petje feels that his explosive come-forward style will easily disrupt Gazani’s game plan and expose any weaknesses that the Brazilian veteran may have.

“My leg kicks are too strong and he (Gazani) will feel the power of my kicks,” said Petje. “My goal is to break him down and knock him out because I intend on keeping my FFC championship belt.”

“It’s very hard to predict a winner for a fight like this,” said Zovko. “The reason is that both guys are known for being knockout artists, very experienced and very aggressive inside the ring.”

Tickets are available for purchase at any Las Vegas Caesars Entertainment Box Office and TicketMaster.com. The ‘multi-discipline’ event will air nationwide on CBS Sports Network, and in Spanish, on Claro Sports in Mexico and Latin America. Check your local listings for more information.