FFC 30 pre-fight press conference – Satoshi Ishii on the quest for the belt, Rene Wimmer claims: ‘Every place is great, but Linz is the greatest!’ 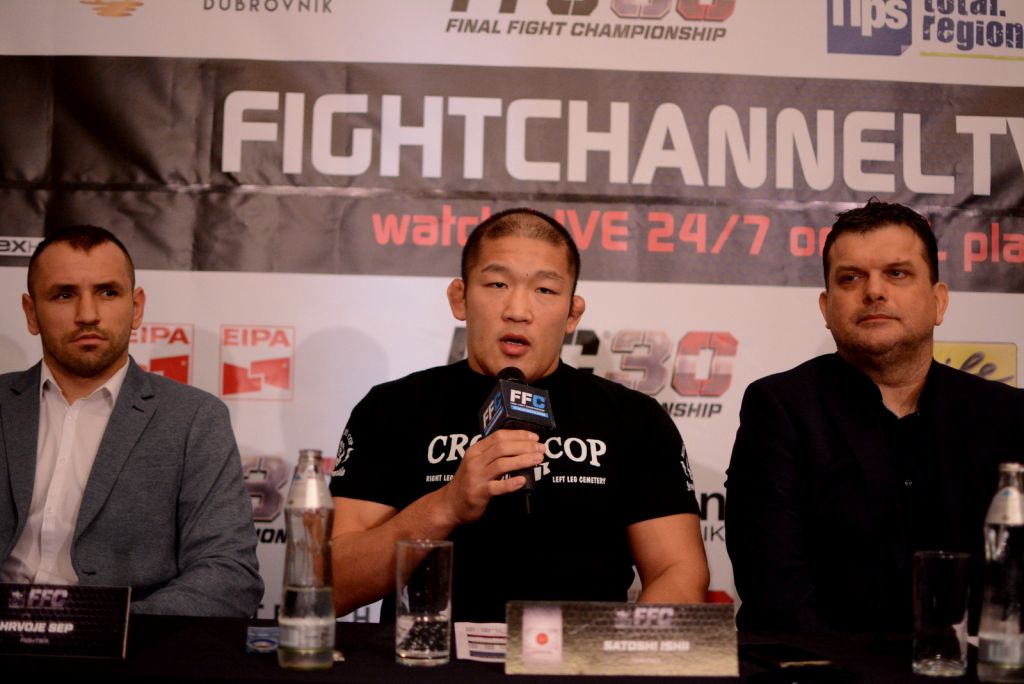 FFC 30 will take place this Saturday, October 21, at TipsArena Linz featuring six MMA, six kickboxing and one boxing match. This is FFC’s third event in Linz and fifth event in Austria overall.

FFC President Orsat Zovko opened the presser with his thoughts on the upcoming event.

‘This is a great experience. We are third time here in Linz with FFC30. It’s a high jump, I think. In last three, four years we did 30 events. There are not too many brands in the world that managed to make this number in such a short period of time. We have good results, we are recognized all around the world, and we are expanding our business overseas… Very soon you will hear some big news about FFC. I’m looking forward for tomorrow because we have great fight card,’ announced Zovko and introduced the attendees.

‘I’m really pleased and honored that one of the best Japanese fighters ever, Satoshi Ishii, Olympic gold medalist and one of the biggest names in Japan, that he is a part of FFC. I hope that he will show good results and get a chance to fight for the FFC belt. I’m glad that we have here one of the best Croatian boxers Hrvoje Sep who proved his qualities world-wide as well as on Olympic Games. I’m really glad he started his professional career at the FFC’

‘Rene Wimmer is Austrian hero. He already fought for the FFC belt and proved he has heart. And Shkodran… I can’t say he is one of my favorite fighters. But I have to be honest and I will tell you why. This guy has been with the FFC from the very beginning. He was in difficult situations many times. He was injured, he fought on late notice… He never said a word.  This guy is a real fighter for me. I really appreciate this kind of a fighter. He is always ready. Even when he is not, he’s not talking much, he is fighting. Thank you, Shkodran,’concluded Zovko.

‘I’m very happy and very proud of this opportunity to work for Orsat to pursue his dream. I’m also very proud of the fact that the FFC is opening the doors to so many fighters. We have people from Brazil, from all over Europe, Japan… This is very unique and very good experience. I’ve been working very hard, I have been hands, ears and eyes of Orsat and we are ready to announce the partnership for the future of the FFC and for everybody. We’re gonna have beautiful 2018. Thank you for being with us,’ Elias briefly concluded.

In the FFC 30 MMA main event, legendary Japanese judoka and Olympic gold medalist in judo Satoshi Ishii will square off with Germany’s Bjoern Schmiedeberg. In case the fight goes in his favor, he might get a shot at the FFC heavyweight belt. Ishii has been preparing for this fight with Croatia’s great Mirko Filipović whom he also fought on two occasions, showing the beautiful aspect of this sport with fighters who fought against each other come together and train with each other.

‘I started to train with Mirko seven months ago. Everything is OK and coming together. He taught me a lot. I hope I will get the FFC belt soon. I’m really happy to fight in the FFC’, said Ishii on his promotional debut and added: ‘I heard about the FFC a couple of years ago and I really wanted to fight in the FFC.’

One of Croatia’s best boxers, Hrvoje Sep, is to make his second professional fight in the FFC ring this Saturday. Sep is European Championship gold medalist and Olympic boxer.

‘I fought all over the world and Europe. FFC is working on a very high level. They are very professional and that’s why I like it here. I believe FFC could have a very good future in boxing. I will do my best to present boxing in the best possible way tomorrow night. My opponent is a very strong guy and FFC helped me to find a tough opponent because we wanna make a good fight’, said Sep.

Shkodran Veseli is no stranger to the FFC and he always put his heart and his soul in order to make a spectacular fight. In a recent interview, Veseli said he was here to collect what was his – the belt that once eluded him. Moreover, the winner of Veseli vs. Chiotis will be the next welterweight contender.

‘I can only thank the FFC that I’m part of it again. I fought for the FFC title last year against Danenberg. I lost, but if you ask me and many other people, we were supposed to fight in an extra round. But let’s forget that. Let’s leave that behind. Now I will fight Dimitrios Chiotis. He is an aggressive boxer and I trained for that. It will be a strong fight when it comes to technical qualities. I trained with many partners in Switzerland who are good boxers. I’m more that 100% ready,’ announced Shkodran.

Austrian hero Rene Wimmer, favorite with the local fans in Linz, will fight in the FFC ring for the fourth time after his spectacular debut when he KO’ed experienced French kickboxer Cheick Sidibe. This time he will fight on his own turf again.

‘It’s big honor for me to fight for the FFC. Every place is great but Linz is the greatest! I would like to say to everybody that they should come tomorrow and see all the great fighters at FFC 30. And me!’ said Wimmer briefly inviting his fans to come and support the competitors.’

FFC 30 Linz weigh-in results Stipe Brčić: ‘When I smell the fear, I feast on it’