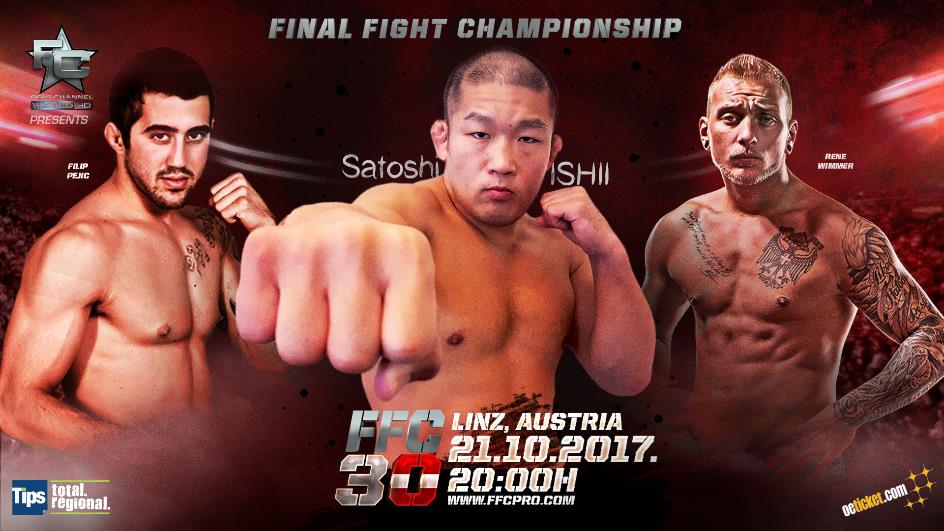 FFC 30 will feature fighters from sixteen countries over all! Read more about the spectacular event below.

Legendary Japanese fighter Satoshi Ishii (15-8-1, FFC 0-0) is the latest addition to the FFC roster and he will fight in the main event of the MMA part of the evening. Ishii is one of the best Japanese MMA fighters and winner of gold medal in judo at Olympic Games in Beijing in 2008. The Japanese fighter is currently in Croatia training with Mirko ‘Cro Cop’ Filipović and he will fight in his promotional debut in Linz. Originally, the event was to be headlined by Holland’s Robin van Roosmalen who had to cancel his match citing injury.

Ishii will square off with Superior FC heavyweight champion Bjoern Schmiedeberg (12-6-1, FFC 0-0) who will also make his professional debut. There is no doubt that this will be a realy heavyweight war not to be missed!

After a longer hiatus, former UFC fighter and FFC featherweight champion Filip ‘Nitro’ Pejić (11-2-2, FFC 4-0-2) will fight under the FFC banner again. Ever since UFC cancelled his contract, Filip Pejić scored two wins, but his last match at FFC 28 with Alexis Savvidis finished as a draw. Another impressive thing about Pejić is the fact that he suffered only one loss in his 13 professional MMA bouts. The only opponent he lost to was Damian Stasiak in the UFC Octagon in his only bantamweight excursion.

At FFC 30 this ATT Zagreb member will face Fabiano ‘Jacarezinho’ Silva (28-10-1, FFC 0-0, fighting out of Brazil) who stepped up to fight the Croatian featherweight. Fabio Silva, currently living and training in Germany, is an experienced fighter with 28 wins under his belt. He scored 10 wins via KO and 12 via submission which only adds to the fact that Pejić might face one of the most difficult tasks so far. Moreover, Silva also fought for the KSW featherweight title in 2016, but lost via decision to defending champion Artur Sowinski.

With these two fierce KO artist in the ring, there is almost no chance this match will go to distance!

When it comes to other interesting match-ups at the upcoming event, FFC will also give a chance to some of the best prospects from Southeast Europe that might be on their way to stardom.  Stipe Brčić, Luka Ćurković and Duško Todorović will thus face the biggest challenges of their careers when they enter the FFC ring for the first time.

Luka Ćurković (4-1, FFC 0-0) and Selim Topuz will open the MMA part of the event. Ćurković already had five pro MMA matches under his belt and he will step into the FFC ring with four consecutive wins.  His opponent is Turkey’s Selim Topuz (1-0, FFC 0-0) fighting out of Austria. Topuz is an upcoming MMA prospect with dominant kickboxing techniques with one pro MMA win. Having in mind Ćurković’s attractive stand-up and ground game, there is no doubt that the MMA part of the event will start with real fireworks!

Stipe Brčić (4-0, FFC 0-0) is young undefeated MMA fighter with streak of four wins. Brčić will square off with Russia’s Magamed Batirov (3-0, FFC 0-0) who is also another undefeated FFC debutant. This match-up will also be FFC’s inaugural bantamweight bout.

Duško Todorović (4-0, FFC 0-0) is a young Serbian MMA prospect with four wins that he all ended via stoppage. Todorović will face Germany’s Alexander Poppeck (8-1, FFC 0-0) in a catchweight match set at -86 kg.

Heavyweight slugfest between Vitasović and Ranjbar

In another brutal heavyweight clash Croatia’s heavyweight Ivan Vitasović (4-3, FFC 0-2) will square off with Iran’s Masoud Ranjbar (3-0, FFC 0-0). Undefeated promotional newcomer Ranjbar scored two TKO wins in his last two fights while Vitasović already had a chance to fight some of the biggest FFC names including Austria’s ‘Hulk’ Stefan Traunmuller and FFC heavyweight champion Darko Stošić. No doubt that this match up will turn into a real brutal slugfest!