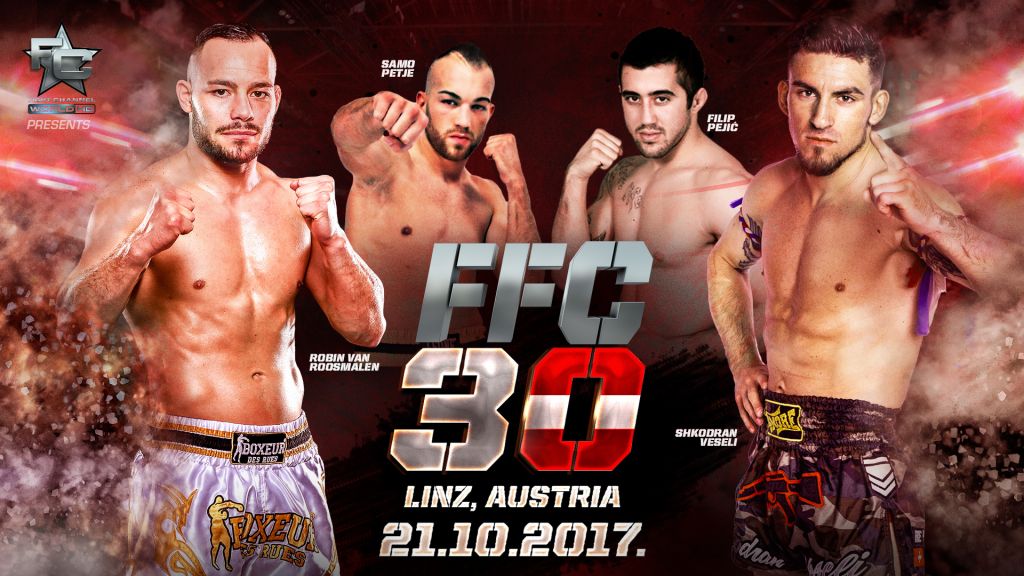 On October 21 Final Fight Championship returns to Linz, Austria, with its 30th edition that will be made up of MMA and kickboxing bouts with Robin van Roosmalen in the MMA headliner and Shkodran Veseli in the main bout of the kickboxing part of the event. FFC thus revealed more names for its FFC 30 fight card!

Two champs back in the FFC ring

Slovenia’s kickboxer Samo Petje (10-2-0) became the first to hold two FFC titles at the same time. After winning the welterweight division belt, he will fight in lightweight division again this fall.

After being brutally KO’ed in Athens in 2016 by Meletis Kakoubavas, Samo Petje successfully returned at FFC 26 Linz! Since then he scored nothing but wins. He retaliated for the devastating loss in one of the most anticipated FFC rematches this year and then challenged FFC welterweight champion Eyevan Danenberg whom he defeated at FFC in his hometown of Ljubljana, Slovenia.

Despite the fact that the name of Petje’s opponent has not been revealed yet, there is no doubt that this match will be bursting with top kickboxing action!

Croatia’s MMA prospect Filip “Nitro” Pejić (4-0-2) will return to the venue where he won the FFC belt in the co-main event of the upcoming FFC 30. In September 2016 at TipsArena, Pejić defeated Ahmed Vila and seized the featherweight throne.

Lemmy Krušič back in action

Lemmy Krušič (2-3-0) has been a member of the FFC roster almost from its very beginnings. After almost two years of absence, this Slovenian MMA fighter currently residing in Linz, is to lock horns with Croatia’s MMA up-and-comer Stipe Brčić. Brčić had four professional wins under his belt and he is preparing for his FFC debut in Las Vegas. Krušič vs Brčič definitively promises some real hard core MMA action!

Ivan Bilić (3-3-0) introduced himself to the fans in Linz last year in a spectacular manner when he delivered one of the most exciting FFC performances and KO’s in 2016. That is why he also earned his spot in FFC 30 kickboxing main event where he is to lock horns with Shkodran Veseli.

In his last performance in Athens, where he faced Eyevan Danenberg, Bilić definitely proved that his is a force to be reckoned with and ready to fight the best. Although he lost to Danenberg, he delivered an extremely exciting match and there is no doubt that this could be one of the most thrilling match-ups at FFC 30 this October.

Greece’s best kickboxer and Samo Petje’s foe Meletis Kakoubavas is also to fight at the same fight card. The video of him knocking out Petje at FFC 22 quickly became viral, but despite the fact that he lost in the rematch, Kakoubavas proved he is ready to face the best in the sport.

FFC 30 tickets are available for purchase NOW through LINK.

Stay to the FFC social media pages for more information on how you can catch some of the action live and direct from Linz, Austria.

Roberto Soldić: “The only fighter I’m interested in is Luka Jelčić” FFC 30: Filip Pejić in his second title defense, FFC reveals his opponent