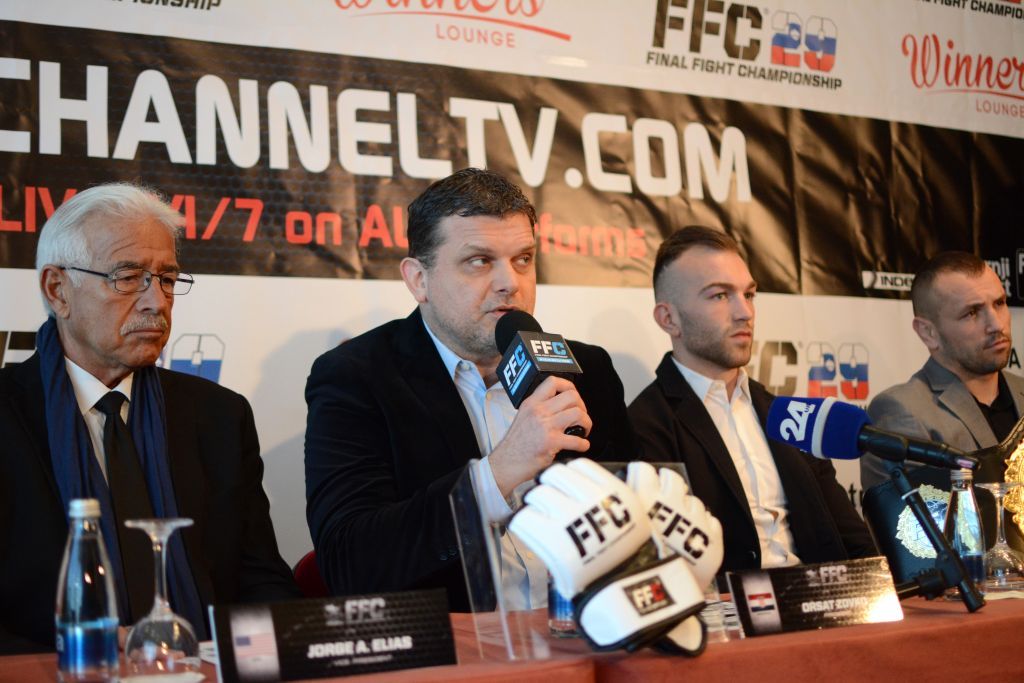 The FFC has returned to Ljubljana, Slovenia, this week for FFC 29: Champion vs. Champion that will take place this Saturday April 22 at Tivoli Hall starting at 8 PM CET.

As expected, all eyes are on the headliners. Lightweight champion Samo Petje will lock horns with welterweight champion Eyevan Danenberg with Danenberg’s gold at stake. In the co-headliner, Mladen Brestovac and Dževad Poturak meet in a heavyweight title match.

“I’m happy to be in Ljubljana again. This is our fifth event here,” said FFC President Orsat Zovko and opened the press-conference. „We always have great events here so I’m happy we’re back. But this event will be special because this is the first time in the FFC history that two champions fight and that we could possibly have a two-division champion.“

Zovko also introduced the latest addition to the FFC team. Jorge A. Elias will be promotion’s new Vice President. Elias worked at the UFC as Director of Spanish Productions and has more than 30 years of senior management experience, including a decade of strategic development and plan execution in the MMA world and TV business. Zovko also stressed out that his presence will be of great help in the future.

“I am simply honored to accept this challenge and be a part of Orsat’s team that he gathered to follow his dream. I’m very honored and I appreciate that,” said Eliot ahead of his first FFC.

Petje in his first attempt at history

FFC kickboxing lightweight champion Samo Petje is very aware of the fact he’s on the verge of making FFC history for tomorrow he plans to accomplish his goal of becoming the first simultaneous two-division champion under the FFC banner.

“I’d like to thank everyone at the FFC for giving me this opportunity,” Petje said. “I’ve fought four times at Tivoli and I scored three KO’s there so Tvoli is my home. I have the opportunity to fight for another title and I plan to seize it. I will take that belt. I trained for this match as usual but we adjusted the game plan. I have to take into account his height and that’s why I sparred with taller opponents. I worked hard for this and I’m ready to show the results. My advantage is speed and agility. Of course, he will try to keep me at distance, but I will try to get into his pockets and we will see what happens.”

“I hope I will end this fight with a KO. But decision is OK too,” Mr Cool explained. „I just wanna keep the belt. That’s the only thing that matters. I will be the winner.”

“It wouldn’t be fun if we reveal everything,” said the champ and laughed.

FFC MMA lightweight champion Luka Jelčić prepared for his upcoming FFC match at SBG in Dublin where he currently lives and trains. His original opponent Valeriu Mircea fought at Bellator only two weeks prior to this event and sustained an injury which resulted in the cancellation. Roberto Pastuch stepped up on short notice but Jelčić does not care whom he is to fight.

“I don’t care they changed my opponent,” said The Hitman. „When I fought in Lubljana for the first time I saw my opponent for the first time as he was walking to the ring. It does not matter. If I was walking down the street and someone got into my face I would fight him. There is no: „Are you ready? Do you need eight weeks? Do you want a massage? Nice shorts?” This is fight. This is fight and I don’t care. My opponent cancelled.  I don’t care.”

Sep hopes for a KO in his pro debut

FFC 29 will also feature a boxing match. Croatia’s prominent amateur boxer and WSB league member Hrvoje Sep is to make his professional boxing debut in the FFC ring. Sep said he decided to save this big moment for an FFC event because FFC President Orsat Zovko and his coach and manager Leonard Pijetraj have been cooperating for many years now.

“I am very happy to be in the FFC,” he said. “I know FFC has been cooperating with the UFC, Glory and other great promotions for many years. I’ve been watching a lot of events and they were always good so I hope we will have fun too. As an amateur I was in a good position, I competed around the world, I gathered a great experience and cannot wait to show what I know. In Olympic boxing it is important to collect points but in professional you have to collect knockouts because they make a fighter attractive and they open new opportunities. So, of course, I hope I will win via KO.”

Boxing is to become a permanent addition to the FFC program and women’s fights could be introduced too.

Zovko confirmed that Sep’s boxing match will not be an exception and that he plans to introduce boxing matches as regular part of the FFC program.

“Of course, we have strategy for 2018,” Zovko explained. “We are looking forward to our first event in Last Vegas and from the event on, boxing will become a regular part of the FFC program. We will be the only promotion in the world with three different fighting sports in one event. Even now we’re special because we combine kickboxing and MMA.”

Both Zovko and Elias confirmed that FFC might introduce women’s fights in the future, especially when it comes to MMA, as UFC did a couple of years ago.