FFC 29 pre-fight press conference: Petje and Danenberg promise to knock each other out 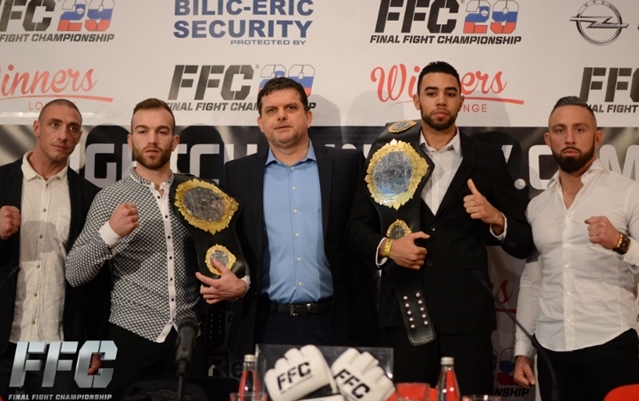 Final Fight Championship is coming back to Ljubljana April 22 with FFC 29 event. This will be the fifth event that this prominent European fighting sports promotion is to organize in the capital of Slovenia, a city that FFC leaders call a second home and a destination to which they always love to return.

“Ljubljana is our second home, and especially Austria Trend Hotel. Here we really feel at home. This will be our fifth event in this city and this one will be specific because, as we have learned, it will be the first time in kickboxing history that a champion of one division fights the champion of another division. I think this will be a real spectacle. All you can do is come to Tivoli Hall and support the fighters,” said Orsat Zovko.

FFC 29: “Champion vs. Champion” features a kickboxing main event with two champions locking their horns. Slovenia’s own lightweight champion Samo Petje is to attack the welterweight belt owned by Holland’s Eyevan Danenberg in a match that will definitely become a part of the FFC legacy.

“I was surprised when Petje called me out. After all, he fights in 70 and I fight in 77 kilo division. I agreed to this fight and I respect his decision, but I have to show him that I am the best in this category and I will prove it next month,” said Dannenberg while stressing out that his reach will be his biggest weapon in this bout.

It did not take long for Petje to reply.

“I’m not afraid of your reach because I will stick to my game plan. After all, I already sparred with many tall guys, maybe even taller than you. I will shorten the distance, stick to my tactics and I put on some five kilos so you will not have the advantage in weight. I will put you to sleep,” said Petje confidently.

“I think you will be the knocked out one”, replied Danenberg.

It should be emphasized that at the same evening FFC heavyweight champion Mladen Brestovac is to defend his title in a match with Bosnian kickboxing legend Dževad Poturak while Luke Jelčić is to defend his belt for the first time in a MMA bout with Moldova’s Valeriu Mircea.

Jurišič a step away from title bout

The latest addition to the FFC roster, Uros Jurišić, will definitely be a great boost for the event in Ljubljana as well as for the FFC in general. This undefeated MMA fighter participated in UFC’s The Ultimate Fighter reality show but after a couple of serious injuries that forced him to stay out of the ring, he finally recovered and is to return in top shape.

“I’m very happy that I will be fighting for one of the best organizations in Europe. I follow FFC since their very beginnings and it is an honor to fight in the FFC ring. I hope I make a good show for the audience,” said Jurišič.

Even before he signed a deal with the FFC, rumors have been cropping around that Jurišič could be the next in line to fight Roberto Soldić for the belt. Unfortunately, Soldić sustained an injury in the meanwhile, but Zovko said that Jurišič could get a shot in case he wins at FFC 29.

Kickboxer Denis Chorchyp participated at the press conference as one of Slovenia’s biggest fighting sports stars despite the fact that it is not sure whether he would fight in Ljubljana. At the moment, Chorchyp competes at „Dancing with the Stars“ and he says that he would put on the gloves only if the drops out of the show.

“First of all, thank you for the invitation. FFC is the best organization and I would fight for them every time,” said Chorchyp. “But at the moment I’m the champion on the dance floor. I participate in the dancing show but it does not mean I will give up on my true love. If I drop out of the show, FFC will be the first stage I will appear at. I train every day so I will be ready if it comes to that.”

Moreover, this year Zovko’s plan is to return to the USA and to organize shows in Las Vegas and Los Angeles that he already scheduled for December 2. For this American events, FFC is to offer “the best we have at the moment,” stressed out Zovko who can proudly say that he is one of the rare promoters who organizes kickboxing and MMA events on both continents.

FFC 29 is to kick off with MMA part of the event followed by kickboxing bouts headlined by Petje and Danenberg. Tickets go on sale tomorrow with the price starting from 20 euro.