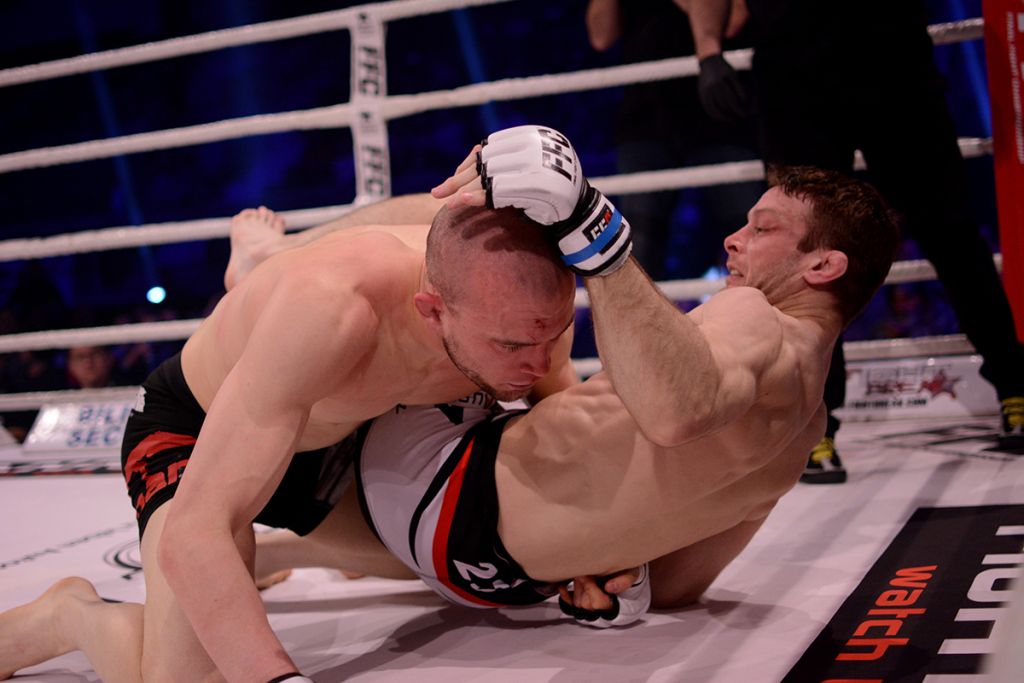 It took only five seconds for Pastuch to take down Luka Jelčić who did not expect such an aggressive offensive from the Argentine fighter. Luka manages to get up after thirty seconds with Pastuch on his back. Nevertheless, Jelčić gets out of that position and gets into full mount. From that position he starts to throw brutal elbows and KO’es Pastuch from half-guard position.

Luka Jelčić thus defended his lightweight title in only one minutes in 15 seconds.

Abusupiyan Magomedov impressed the FFC audience again and this time even more that in his debut match with Ivica Trušček. Magomedov started aggressively from the very beginning and knocked down his opponent with an uppercut after only one minute. Very soon after that he finished Souza via stand-up guillotine. Impressive!

The bout between the former FFC champ and FFC Futures champion lasted for only two and half minutes, but it was packed with action. At the very beginning of the first round it seemed that Kolarič was relieved by the fact that he was an underdog in this match and he started very aggressively. He managed to take his opponent down and tried to find a way to finish him. However, Vila remains calm and manages to grab Kolarič’s arm. Kolarič manages to withstand the pressure and Vila lets go only to get to an even better position when he finishes Kolarič via triangle choke. The choke was too tight and Kolarč taps. Vila once again proved that he has an excellent technique which he lately polished in Stockholm’s famous Allstars Gym.

In the first round Erslan and Tadijanov tested each other and kept the distance after which Tadijanov lands a right hook and closes the distance. First they clinched on the ropes and then got to the corner of the ring. Erslan managed to get out and Tadijanov seized the opportunity to take down his opponent only 30 seconds before the end of the round not having enough time to inflict any damage.

The last round was a stand-up round again. Erslan looked better and his punches were more precise. It was obvious that both fighters were tired but Erslan was ready enough to defend himself from Tadijanov’s takedowns. He scored points with single shots and thus won the third round.

The match kicked off quite inactively for the first four minutes of the first round. Both fighters entered this match with a lot of respect and Ostanek managed to get into the full mount no sooner that at the end of the round. He did not inflict any damage to his opponent but did enough for the judges to score in his favour.

After a minute and a half in the second round, the fight goes to ground and Ostanek manages to get into the full mount controlling his opponent. Memović manages to get up for a brief moment but Ostanek takes him down again. However, Memović seized the opportunity to make a transition and get into the full mount. He tries to get into position to choke his opponent but Ostanek remains calm and turns the situation to his favour. In the last minute of the round they change the positions once again and Memović tries to get the guillotine, but fails to do so.

In the third round Ostanek controls the situation again and manages to take Memović down. Memović barely had strength to try to get the armbar, but fails in the attempt and Ostanek controls him to the very end rightfully winning the match.