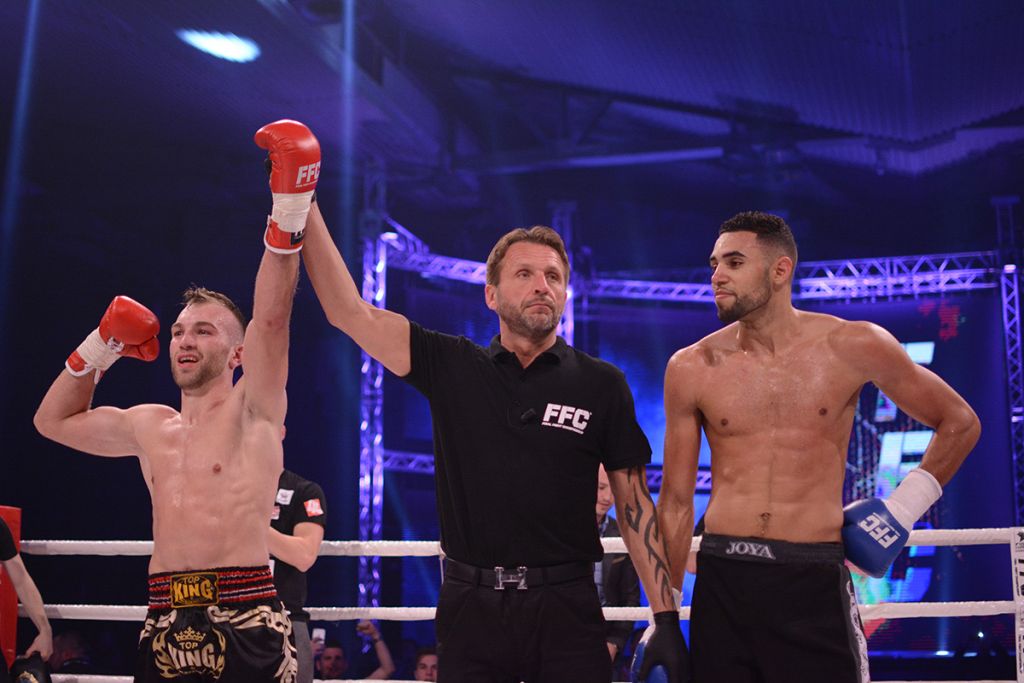 The first round of this title bout was very edgy but Samo Petje displayed a lot of courage and will to fight a significantly taller opponent. He attacked showing Danenberg no respect whatsoever, while Danenberg defended himself in his own specific manner. He waited, he blocked and he sought the opportunity to land his precise punches. Petje visibly had problems with his height and it was hard for him to get to Danenberg’s head, but Danenberg also failed to put the advantage in his height and reach into use. Mostly because Petje showed excellent agility and great footwork.

The second round continued in the same manner. Petje continued to push the pace not letting Danenberg attack. But Danenberg managed to land a couple of precise shots. In the end they got into exchange but the round ended before it turned into fireworks.

At the beginning of the third round Petje attacks his opponent aggressively and Danenberg finds himself in a dangerous position after Petje’s two big hooks. However, he manages to go on and realizes it was about time to counterattack which Petje accepts both-handedly and fights as if he has nothing to lose. The action continues till the final bell.

Despite the fact that many expected the fight will go to the extra round, the judges were convinced Petje did enough to become FFC’s first two-division champion. Petje thus rocked the fighting sports scene and made FFC history.

The second round continued in more or less the same manner. However, Poturak managed to find a window for an uppercut and shook Brestovac up. Mladen continues with kicks barely throwing punches here and then for Poturak never managed to close the distance.

BH Machine continues to fight bravely, but Brestovac was absolutely superior in his techniques for this experienced kickboxing veteran. Poturak did not give up at any point but he never got a chance to land any significant shots.

FFC’s youngest fighter Donegi Abena scored another excellent win against one more experienced opponent but it seems Fouquet entered the match with a rib injury. It was obvious after Fouquet received a mediocre shot that led to a count. Abena recognized his opponent’s weakness and continued to punch the same spot until the third count after which the match was stopped. It was Abena’s second FFC match and his second FFC win via 1st round KO.

A very attractive match in which Wimmer proved again that he is a tough fighter and that he rightfully fought for the title last year. But this time he found himself in the ring with a better man. Wimmer and Aleksander Stankov fought in a tremendously attractive match but Stankov started off better. However, as the seconds went by, Wimmer started to control the pace. After a very tight first round, Wimmer dominates in the first half of the second round but then Stankov regains his strength and scores points with a couple of combinations making it really hard for judges to decide.

The third round kicks off very aggressively and they both try to land a punch that will finish the match. And that punch comes after only 30 seconds. Stankov seized the opportunity to land a spinning kick right to Rene Wimmer’s liver. The Austrian fighter tried to get up, but the pain was not bearable and Stankov scored his first FFC win.

Mikelić starts the first round very aggressively but Zekaj soon relaxes and starts to land punches. The Albanian fighter also landed a couple of impressive low kicks, but the match was very tight because Mikelić dominated in the first part of the round. The second round was quite similar and Mikelić threw better punches while Zekaj landed impressive kicks.

Mikelić proved to be a better fighter in the third round where he displayed a vast variety of techniques. Moreover, he seemed very fresh when he scored a brutal shot only 15 seconds before the end of the round. He landed a massive spinning kick to Zekaj’s body who gasped for air after which Mikelić wins via unanimous decision.

Mensur Murić dominated his opponent with phenomenal combinations of jabs and low kicks from the very beginning. Šakić simply could not find an answer to that. At the very end of the second minute, Murić changes his game and throws a swing that sends Šakić to the ground, but Šakić manages to get up. Murić continues to attack without landing another significant shot.

In the second round 20-year-old Murić proves he came to Tivoli to impress. Šakić withstands his incredibly powerful shots and kicks, but Murić insists on finishing this match before the final bell. But it never happened since Šakić managed to avoid his attack and absorb his brutal shots.

Sep makes his boxing pro debut with a 1st round KO win! Samo Petje rocked the fighting sports scene and made FFC history