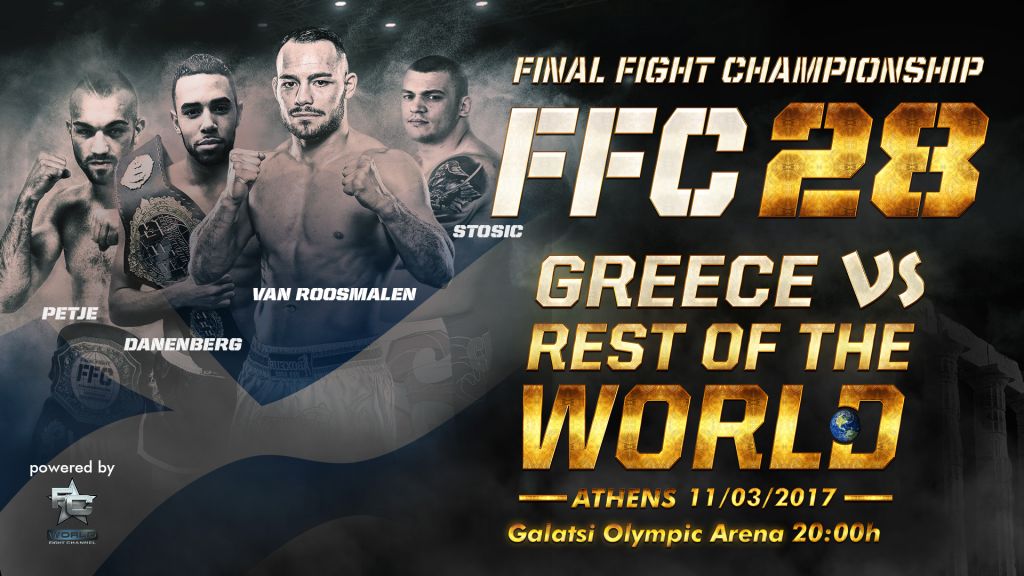 A year after a very successful debut in Greece (FFC22), Final Fight Championship® is coming back to Athens with even stronger fight card and even more impressive fighting sports spectacle. FFC 28 is to take place March 11 with six kickboxing matches and six MMA bouts. This event dubbed Greece vs. Rest of the World will also feature three title matches and it will take place at the Galatsi Olympic Arena, Athens.

The first FFC® in Greece took place February 2016 and it was rated as the biggest fighting sports spectacle ever in Greece by the media. Robin Van Roosmalen’s MMA debut raised everyone’s curiosity and numerous KO’s emphasized the quality of the amazing fight card.  This is why FFC® decided to return to this Mediterranean country to raise the bar even a few levels higher. Spectators will have a unique chance to see some of the top kickboxers and MMA fighters in super exciting match ups with even more impressive production.

The upcoming FFC 28 event is one show with two fighting sports spectacles in one and probably the best fighting show in Greece in modern times. FFC 28 “Greece vs. Rest of the World” is definitely not to be missed since it will turn Athens into the center of fighting sportsworld for that evening.

In the main event of the MMA part of the evening, one of the world’s best kickboxers Robin Van Roosmalen (1-0), will have his second MMA bout. This Dutch fighter made a brilliant MMA debut last year in Athens when he KO’ed Athinodoros Michailidis in the second round after brutal war in the ring. It is unnecessary to stress out that this year Van Roosmalen will be in the limelight again and his opponent will have his hands full with this natural born KO artist who delivered some highlight KO’s last year. This time Van Roosmalen will lock horns with FYROM’s Risto Dimitrov who will fight in the FFC ring for the third time in his career.

In the co-main event FFC® heavyweight champ and one of Europe’s top MMA fighters Darko Stošić (10-1) is to defend his belt for the second time in the FFC ring. His opponent will be European MMA veteran coming from Bulgaria, Emil Zahariev (22-7) making his 30th pro MMA match. Another interesting fact is that the two were to fight at FFC® in Athens last year when Stošić has not yet been the champion. However, logistics stopped Zahariev from entering the FFC® ring and the match was cancelled and postponed last minute. But now the time has come to lock the horns for real and to settle the score. Who is to be the owner of the prestigious FFC heavyweight belt? Will it be Serbia’s or Bulgaria’s best? We will find out March 11 at Galatsi Olymic Arena.

Greek audience will also have a chance to enjoy the new match of Croatia’s Filip “Nitro” Pejić (12-2) who is also FFC® featherweight champ. This former UFC fighter will this time fight in a heavier division and his opponent will be Greece’s biggest prospect Alex “The Furious Kid” Savvidis (14-6). It will be a clash of huge talents that will surely reign the division in the next decade. And while Pejić already experienced the lights of the world’s biggest stages, Savvidis hopes this FFC bout will be a turning point in his career and that nothing will be the same after this match.

Greek hard core MMA fans will also definitely enjoy the all-Greek match featuring Alexandros Papadimitrou (1-1) and Giannis Michalopoulos (0-0) in the lightweight division. Papadimitrou impressed FFC® match-makers and leaders when he KO’ed Bulgaria’s excellent Vladislav Genov in his FFC® debut. After this brave and uncalculated match, many started to consider Papadimitrou and the new Greek rising star and a fighter who definitely has to have his spot at biggest events in Athens. At FFC 28 his fellow countryman and fierce rival Giannis Michalopulos will do his best to dethrone him and strip him off the belt.

Kickboxing part of the evening will be headlined by a real fighting sports gem since Slovenia’s Samo Petje  and Greek KO artist Meletis Kakoubavas will have a rematch in lightweight division. First time they met in the FFC® ring at FFC 22 when Kakoubavas KO’ed this Slovenian fighter in the most brutal and shocking way and took the belt from the FFC® champ. Video of this mega KO was replayed in the media and shared on social networks for months that followed, but good luck for Kakoubavas did not last long. Serious injury and a surgery that followed forced Kakoubavas to take a longer break and thus he had to give up his FFC® title focusing on recovery. In the meanwhile, Petje scored new wins and seized the throne again meaning that this match will be a kind of a „deja vu“. Will this revenge thirsty Slovenian fighter score a much wanted win? Or will Kakoubavas defeat his opponent again in front of his hometown audience? Find out at FFC® 28 at Galatsy Olympic Arena this March. The match between Petje and Kakoubavas is definitely the most anticipated clash on this fight card.

The co-main event will feature a title match in welterweight division. FFC® champion and member of prominent Glory kickboxing promotion  Eyevan Danenberg will defend his title for the first time against Croatia’s up-and-comer and hard hitter Ivan Bilić. Danenberg won the title in September 2016 and he is still undefeated in the FFC® ring after he defeated some of Europe’s best KO artists like Shkodran Veseli. On the other hand, Bilić impressed FFC® leaders and earned the contender spot after impressive wins in 2106.

Another title bout in the kickboxing part of the event will be the one featuring Bosnia’s hard hitter Denis Marjanović and Croatia’s up-and-coming contender Andi Vrtačić. Marjanović won his belt at the most recent FFC® event in 2016 in Zagreb. At the same event, Vrtačić scored an impressive win and secured himself contender position.

The only heavyweight kickboxing match on this fight card will be the one between Greece’s undefeated super talent Stavros Grigorakakis and FFC® veteran Tomislav Čikotić. Both fighters are known to be hard hitters and KO artists and the spectators at the Galatsy Olympic Arena will have to have their eyes wide open for it is not likely that this clash between two giants is to go to distance.

FFC 28: Athens: Greece vs. Rest of the World