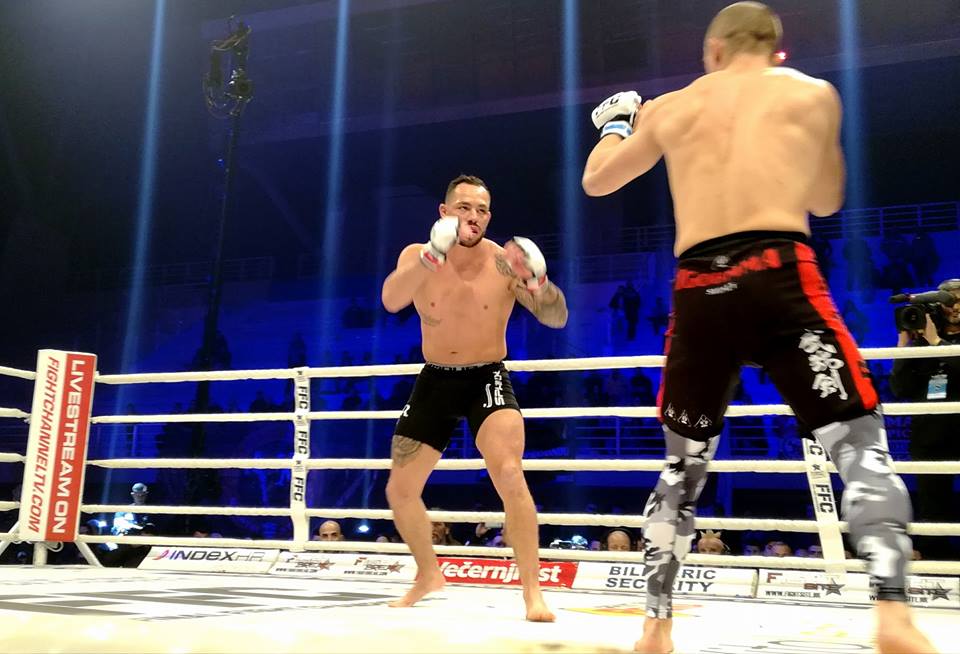 This Saturday, March 11, Final Fight Championship held its 28th event and returned to the capital of Greece with six MMA and six kickboxing matches.

The main event of the MMA part of the show featured Dutch kickboxing superstar Robin Van Roosmalen. The Dutch fighter scored his first MMA win last year in Athens via brutal KO and this time he won via TKO. Famous Glory champion KO’ed his opponent Risto Dimitrov from FYROM already in the first round with a big hook. The punch was too big for Dimitrov and although it seemed he might get up, he was not able to continue. Up to that moment Van Roosmalen dominated in stand-up and Dimitrov desperately tried to take the match to the ground.

In the co-main event of the MMA part of the show, one of the best European heavyweights Darko Stošić scored a super fast win over Bulgaria’s Emil Zahariev.

Bulgarian veteran and Serbia’s young prospect already had a fight scheduled last year but Zahariev had to cancel the match last minute. This time he made it to the ring, but did not last long in it. Stošić defended his belt with a couple of big low kicks after which Zahariev could not stand anymore because of a knee injury. Zahariev only tried to take Darko down once, but he defended it with ease. This is Stošić’s seventh consecutive FFC win.

FFC featherweight champion and one of the best young European fighters Filip ’Nitro’ Pejić returned to the FFC ring and fought against Alex Savvidis in catch weight this time.

In the beginning the two only tested each other and after two minutes of the first round Savvidis managed to take Pejić down. Despite the fact that Pejić managed to get up before the bell, the first round lacked action. Pejić started to be more dominant in the second round and he started to throw more punches. However, in the third round Savvidis scored another throwdown and got Pejić’s back simultaneously landing punches on his head. Pejić managed to get out this dangerous situation, but neither fighter scored extra points in the last minutes of the bout. The match ended as a draw and neither of the two was too happy about it.

It should be emphasized that Pejić definitely dominated in stand-up. He was more precise when it comes to landing punches but his takedown defense was not that impressive and this is where his opponent scored the most points.

The most controversial match of the evening was the one between Stamatis Moroulis and Edgar Santos. Greek fighter won via TKO after quite a controversial situation. After a round and a half of complete domination, Moroulis picked up the pace and hurt Santos. Santos fell and Moroulis tried to finish him with GNP. A couple of punches landed on the back of his head so the referee warned the Greek fighter and gave Santos enough time to recover. Santos was not able to continue and asked for the disqualification of his opponent. However, the referee estimated that the punches were not that serious and that Santos would not be able to continue anyways, so Moroulis won the match. Greek fans were very happy with the decision, but Santos and his team objected, as expected.

Greek MMA fighter Andreas Michailidis notched a win against FYROM’s Borče Talevski in -84 kg after Talevski verbally gave up. It was all done at the very beginning of the match. The Greek fighter was simply more dominant, stronger and better. He just ran over Talevski who panicked and gave up, a scene rarely to be seen on such a professional level.

FFC 28 Athens – Kickboxing results – FFC crowns new middleweight champion, Danenberg defends his title Filip Pejić: Something went wrong in my head, my coach asked me where I was