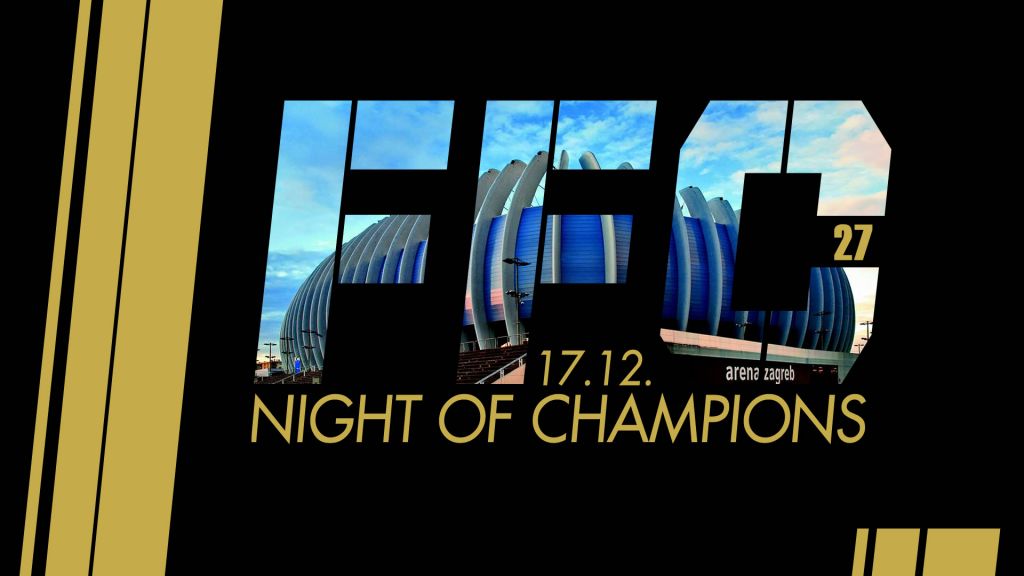 Final Fight Championship decided to wrap up 2016 with its biggest event so far on December 17! FFC 27 – Night of Champions will be held in Croatia’s capital at Zagreb Arena that already hosted Cro Cop Final Fight, K-1 WGP, Glory and UFC Fight Night.

FFC 27 will be the night of champions and almost every match will be a title fight. In the meanwhile, three FFC champs vacated their spots which means that there will also be some unexpected bouts. Marcin Prachnio (MMA,-93kg), Ahmed Vila (MMA, -70kg) and Laszlo Senyei (MMA, -77kg) decided to change their weight classes and FFC 27 will thus crown their successors. There is no need to emphasize that the fight card will be more than spectacular and the audience in Croatia will be more than pleased since six Croatian fighters are to step into the FFC ring that night.

The main event of the MMA part of the evening will feature a rematch between Dion Staring (34-13) and Darko Stošić (9-1). The only difference will be the fact that Darko Stošić is now the one to defend the belt and Dion staring will try to win it back. ‘The Soldier’ dominated FFC heavyweight division for quite a long time and defeated Rodriguez, Delija and Kraniotakes so it is of no surprise at all that he got an instant title shot.

Croatia’s Maro Perak (25-6) and America’s Jeremy Kimball (13-5) will fight for light heavyweight title in the co-main event. ‘Gladiator’ is still undefeated in the FFC and now he is to return to FFC ring after a couple of matches in Russia’s M-1 Global. Kimball earned his shot after his impressive FFC debut at FFC 25 in Daytona Beach. In only 14 seconds he managed to KO his opponent, TUF winner Matt Van Buren. This is also his third consecutive win.

Another US fighter that is to fight in the middleweight division is UFC and WSOF veteran David “Bulletproof” Mitchell (21-6). His opponent this time will be Moldova’s Pavel Doroftei (17-3). The two were to fight at FFC 26 in Springfield, but Doroftei did not manage to make it due to visa problems. This excellent London Shootfighters member has two impressive FFC wins under his belt and in the meanwhile he also became a member of UK’s UCMMA, which was enough for him to earn  the title fight against Mitchell for the inaugural middleweight title match. This will undoubtedly be one of the most exciting matches on the whole fight card.

Hungary’s Laszlo Senyei decided to leave the middleweight division and FFC’s middleweight title thus remained vacated which means that FFC 27 will also crown his successor at Zagreb Arena in December. One of Croatia’s favorite and most charismatic fighters Ivica „Terror“ Trušček (31-27) will get his title shot after two impressive wins against former champ Viktor Halmi and top welterweight fighter Vladislav Kanchev. His opponent this time will be one of the Bosnia’s biggest potentials – Roberto Soldić (7-2). The audience in Zagreb already had a chance to meet Soldić at FFC 20 at Cibona when he scored a dominant victory against FFC Futures champ Saša Drobac. It will be a classic clash of experience and youth that guarantees a spectacular match.

When it comes to the vacated lightweight title, Croatia’s fighter currently residing in Dublin, Luka Jelčić (8-2) will fight one of Italy’s biggest MMA potentials, Danilo Belluardo (6-1). In his FFC career, Jelčić scored three impressive wins which was then confirmed in Ireland’s SBG where he trains as one of Conor McGregor’s sparring partners. Recently he also became a champ of England’s Total Extreme Fighting which only sealed his lightweight contender spot. Belluardo is undefeated in the FFC ring and he scored some impressive wins against Futures champ Tilen Kolarič and big Dutch hope Hubert Geven. He recently made his debut in Bellator and he is known as one of Italy’s biggest MMA rising stars. Moreover, he has been training for a while now in Croatia under Zelg Galešič.

Popular hometown hero Filip „Nitro“ Pejić will defend his featherweight division belt. After a very brief episode in the UFC, Pejić changed his team to ATT and defeated Ahmed Vila in an impressive match at FFC 26 in Linz, thus winning the belt. He will defend his title for the first time against England’s James „Job Done“ Brum (18-4) who made his FFC debut in Vienna against Philipp Schranz. This victory almost got him a UFC contract, but he continued to fight in Europe in the end. This will be Pejić’s chance for redemption in front of his hometown audience that will surely come in great number to support their hero.