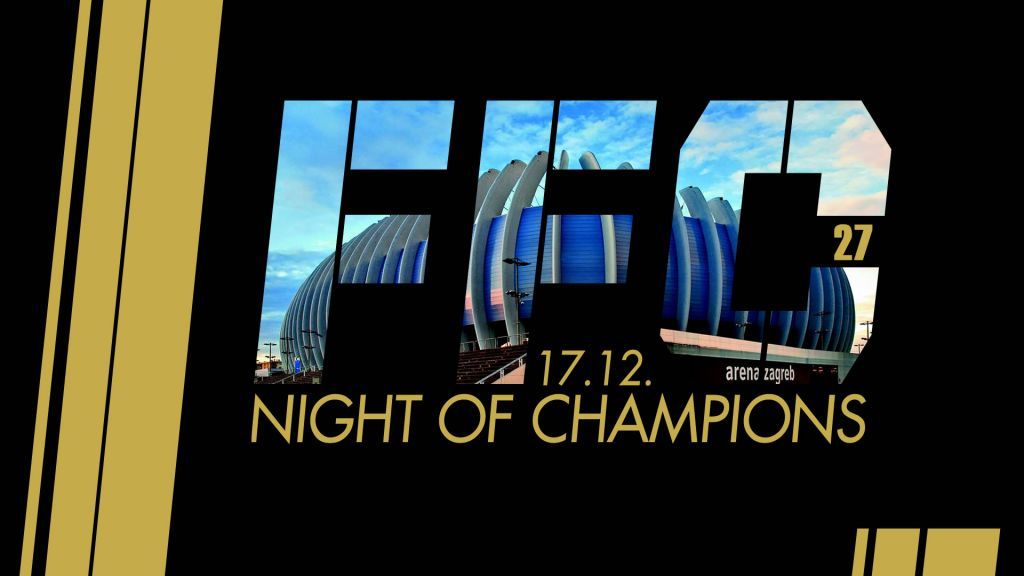 Final Fight Championship will wrap up this year with style – and with the biggest event so far. FFC 27 Night of Champions will take place on December 17 at Zagreb Arena, Croatia, that so far hosted spectacles such as Cro Cop Final Fight, K-1 WGP, Glory and UFC Fight Night.

FFC 27 will be the night of champions and almost every match will be a title fight. In the meanwhile, three FFC champs vacated their spots which means that there will also be some unexpected bouts. Marcin Prachnio (MMA,-93kg), Ahmed Vila (MMA, -70kg) and Laszlo Senyei (MMA, -77kg) decided to change their weight classes and FFC 27 will thus crown their successors. There is no need to emphasize that the fight card will be more than spectacular and the audience in Croatia will be more than pleased since six Croatian fighters are to step into the FFC ring that night.

The co-main event will feature two big light heavyweight names. Ukraine’s Pavel Zhuravlev will defend his belt again, this time against Bosnia’s best kickboxer Dževad Poturak. „Caiman“ so far won four times in the FFC ring and suffered only one loss to Hesdy Gerges. His last two matches in the FFC ring were especially impressive since he KO’ed Brian Douwes and Benjamin Fuimaono. Poturak does not need a special introduction since he is Bosnia’s best fighter ever and he defeated big names such as Daniel Ghita, Melvin Manhoef and Alistair Overeem. So far he fought in FFC twice and scored two wins and two losses. This will be his first light heavyweight match since 2013 when he lost to Igor Jurković. „BH Machine“ is now at the end of his career and he definitely deserved a chance to take a shot at FFC belt which was also one of his big desires.

When it comes to the inaugural middleweight title bout, Bosnia’s hard hitter Denis Marjanović will face Austria’s Rene Wimmer. With impressive score of more than 40 professional wins, „The Lumberjack“ is known as one of the best kickboxers in Southeast Europe. After two impressive wins in the FFC ring he also deserved this title match. His hometown of Banja Luka in Bosnia is only hour and a half ride from Zagreb and it is sure that a big number of his fans will come to watch this match. Wimmer made his FFC debut at FFC in Linz when he KO’ed excellent French fighter Cheick Sidibe. The competition in this FFC division is very tight and it was not easy for the FFC leaders to choose since there are quite some fighters who deserve a title shot, especially Glory’s Jason Wilnis. However, he was not able to make it this December, but it is sure he will soon be a future contender.

FFC welterweight champion Eyevan Danenberg will unfortunately not be able to defend his belt at FFC 27 due to health problems and very exhausting fighting year behind him. This is why FFC decided that FFC Futures winner Jasmin Bajrović and Ivan Bilić will fight for the contender spot. Bajrović is the only fighter who managed to pose a real threat to the Dutch champ so fat in the FFC ring (he was defeated only after an extra round), while Bilić got his chance due to an impressive win in Linz when he spectacularly KO’ed Kristijan Franjić. This is also the only bout between two Croatian fighters on the fight card.

The match that will open the whole show will definitely be a treat for the audience in Zagreb since former -70 kg champ Samo Petje is to fight Tigran Movsisyan from Check Republic. FFC champion Kakoubavas was not able to take this match due to a bicep injury and surgery. He won the belt almost a year ago with a spectacular KO, but he was not able to return to the FFC ring so far. FFC had no choice but to pick Petje and Movsisyan who fought for the first time at FFC 21 in Rijeka in 2015. In a very tight match, Petje won via decision. Both Petje and Movsisyan scored impressive wins in their last matches; Petje defeated Zahid Zairov in Linz while Movsisyan defeated Jovan Davis at FFC in Daytona Beach. Petje has risen to the star status in Slovenia in the last couple of years and it is sure that a big number of his fans will come to support him.