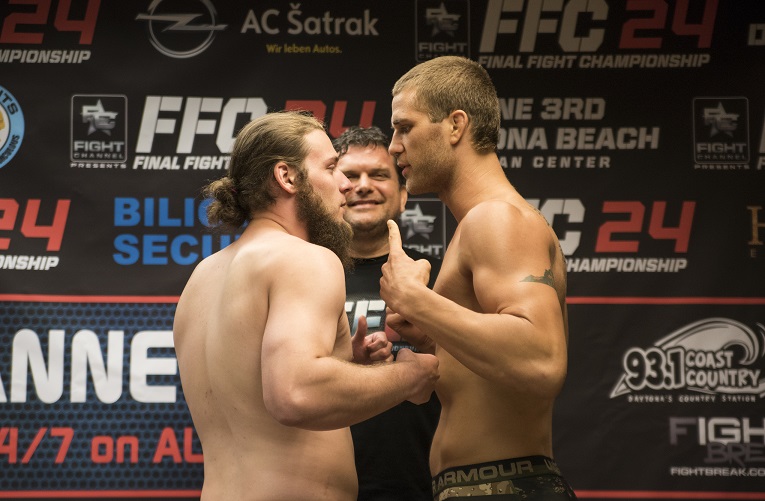 DAYTONA BEACH, FL – The official weigh-in for FFC 24 took place this Thursday at 5 PM. The event itself will take place this Friday and it will be comprised of six MMA matches as well as five excellent kickboxing bouts.

Most of the fighters made the weight with an exception of few fighters who were given an additional hour to make it. There were no significant incidents between the opponents except a minor verbal clash between Jeremy Kimball and Matt Van Buren. The fighters also gave their statements to the media ahead of tomorrow’s matches.

The MMA part of the event will be filled with fighters coming from the US and Brazil and it will be headlined by two Brazilians – Thiago Rela and Danillo Villefort who is more than ready for his significantly taller opponent.

“Thiago is a jiu jitsu guy and has jiu jitsu background. I know that he is now training with Lorenzo Gracie in New Jersey. He has pretty decent ground game that we already went through and we worked on the game plan and what we gotta do to avoid his game plan. I will see if I can go for finish, if not, I will go for three rounds,” said Villefort.

When it comes to other interesting names, this FFC will also mark Matt Van Buren’s clash with Jeremy Kimball who got into a minor verbal clash at the face offs.

“I am 100% ready. I know he can get knocked out so I cannot wait for that. I’m gonna knock him out in first few seconds,“ said Jeremy Kimball and added: „I think FFC is huge. We need a big promotion to come around and give us kickboxing and MMA. It’s awesome and great start here in Daytona.“

When it comes to the kickboxing part of the event, it will probably be more interesting to the European audience since it is headlined by Mladen Brestovac and Steven Banks. It will be Brestovac’ first match after losing to Rico Verhoeven in a Glory heavyweight title match.

“I don’t know much about my opponent, except for what I’ve seen on YouTube. He already fought in some big promotions like SuperKombat and Kunlun. He is tall and heavy, even a bit too heavy. His technique is not that good, but he relies on his strength. I will move and see how he reacts to my punches. If I feel he won’t be able to follow my tempo, I will go for a finish,” said Brestovac about his opponent.

Mladen Brestovac is also the only Croat on FFC 24 fight card, which is significant since FFC is originally Croatian promotion.

“It all looks great so far. I am really impressed. Especially after they told me that the venue can take up to 8000 people. That is really impressive for a debut event. Fight card is not bad, there are a lot of American up and coming fighters, as well as the two of us from Europe.”

When it comes to the other fighters and promising bouts, Tigran Movsisyan is definitely a force to be reckoned with. Movsisyan already proved himself in the FFC ring and he even got a title shot that he missed in a tight match with Samo Petje. This Friday he is to lock his horns with America’s Jovan Davis who is a Muay Thai fighter but also has a couple of professional boxing matches under his belt.

“Movsisyan has been around for a while, he has more fights than me. This is my 4th match and he has some 30 fights so this is big step up for me. He’s very powerful, very good left hand, left hook is his main weapon. I’m looking forward to a very good fight. FFC is big stuff for me. It’s a big step,” said Davis ahead of his FFC debut.

Check out the official weigh-in results:

Mladen Brestovac ahead of his FFC 24 match: “This is a bold move” FFC 24 – DAYTONA BEACH – RESULTS