FFC 23 weigh-ins: “Braveheart” Gluhak takes it all off to meet the scales! 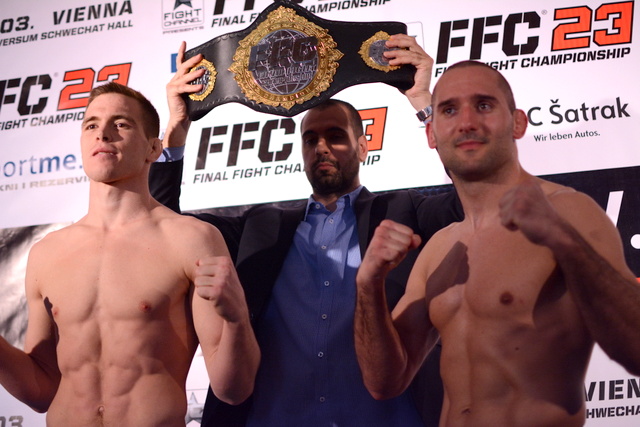 Everything is ready for the 23rd FFC edition that is to take place tomorrow, Friday, March 18, at Multiversum Schwechat.
The official weigh-ins took place this Thursday afternoon and all the fighters managed to meet the scales. However, it was really tight for welterweight champion candidate Croatia’s Ivan Gluhak who is to fight Hungary’s undefeated Laszlo Senyei. Ivan had 100 grams too much, but when he took off his underwear, the scales finally showed 77,4 grams making exhausted Gluhak very happy.
Lightweight contender Ahmed Vila will have to do weigh-ins later today because of the flight schedule, while there were no problems when it comes to other FFC 23 fighters.
A couple of last-minute changes
FFC 23 fight card suffered a couple of last minute changes. The HW match between Cikotic and Sljivar is completely off due to Cikotic’s injury and was thus replaced by the match between two Austrian fighters who are to make their FFC debut and warm up the audience at the beginning.
As previously mentioned, Bosnia’s Ahmed Vila stepped up against FFC champ Viktor Halmi and is to fight for the title. The original contender, Dagenstani fighter Ramazan Sulebanov, got stuck at the Moscow airport due to visa problems. However, Vila just finished his preps for another match that got cancelled and was ready to step up on short notice.
FFC 23 is made up of 11 matches separated into kickboxing and MMA part of the show, this time with two title bouts. Kickboxing section kicks off at 8 PM, while MMA matches begin at 10 PM. Watch FFC 23 on www.fightchanneltv.com! Tickets available at www. OETicket.at.