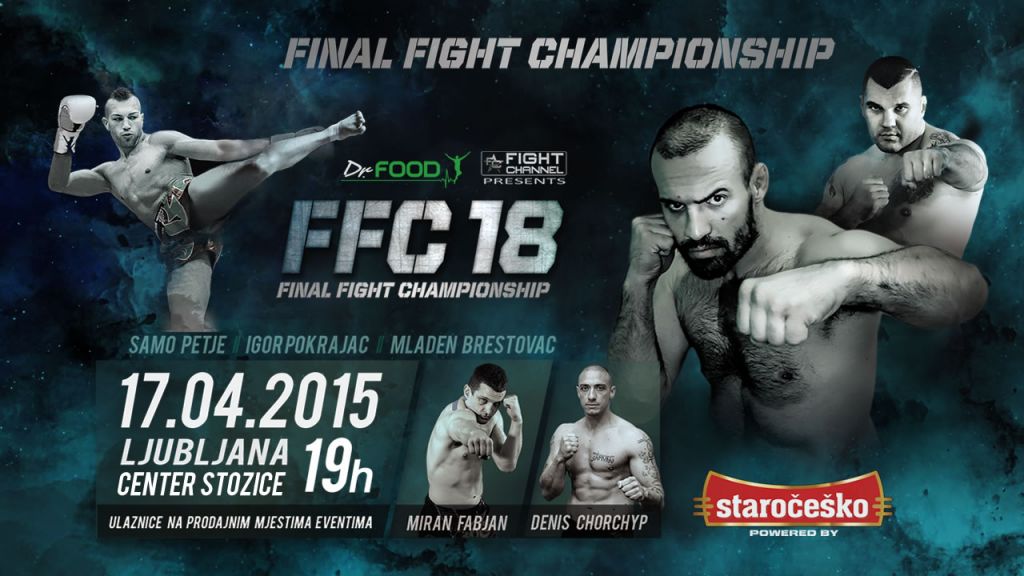 Leading regional fighting sports promotion Final Fight Championship returns to the capital of Slovenia for the fourth time April 17. This time with the most spectacular fight card Ljubljana has ever seen!

Petje vs. "The Italian Nightmare"

The local audience at FFC 18 will probably be the most interested in the match of the most popular and the best Slovenian kickboxer Samo Petje who is to defend the title against Rosario Presti from Italy. The match will be even more interesting because Presti is the only fighter who managed to defeat Petje in last two years. Petje recently scored numerous successes in Europe as well as in Japan where he defeated Japanese stars such as Watanabe and Kido. The young Slovenian kickboxer has progressed even further signing a contract with Glory.

Moreover, FFC heavyweight champion and Glory top fighter Mladen Brestovac is also to fight in the FFC ring again. “The Scorpion Sting” currently scored a streak of impressive eleven victories while he defeated fighters such as Wilnis, Munoz, Lascenko and Cenik. Glory already announced that the Croatian fighter is to fight at a Glory event in May or June and Ljubljana will serve as an excellent test ahead of his upcoming bout with one of the Glory Top 10 fighters.

Miran Fabjan, “The Slovenian Rocky” is also to fight at FFC in Ljubljana again. In his last match in Ljubljana he returned to the winning streak and defeated Montenegrin Boban Krusic. This time he will get a new shot with the KO artist from Banja Luka – Denis Marjanovic who fought at FFC 7 in Sarajevo when he also defeated Krusic.

The Slovenian spectators will be especially thrilled with the match of Slovenian fighter and rapper Denis Chorchyp. Chorchyp scored impressive two victories in the FFC ring and defeated Darian Paladin in a rematch as well as experienced fighter Dzenan Poturak. He will try to continue his winning streak with a match against young Check kickboxer Vasil Ducar.

Former UFC fighter Igor Pokrajac is to headline the MMA part of the event. His opponent in Ljubljana will be Archontis Taxiarchis from Greece. “The Duke” was the part of the world's leading MMA promotion for more than five years and he defeated fighters such as James Irvin and Krystzof Soszynski. UFC fans praised him for his uncompromising style that knows no calculation. It is clear Pokrajac could be one of the candidates for the FFC light heavyweight title with other fighters such as Sakara, Browarski, Spahovic, Prachnio, Batinic, Batur, Perak and others. When signing a deal with the FFC Pokrajac announced that the FFC title might help him to return to the UFC, which is his ultimate goal.