Chorchyp breaks his forearm in the match at FFC 14! 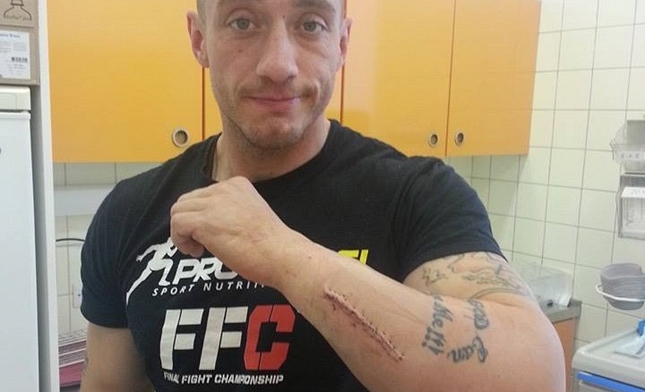 One of the biggest surprises of FFC 14 that took place in Ljubljana last Friday was the victory of Denis Chorchyp  who defeated favorite Dzenan Poturak from Bosnia and Herzegovina. Despite the fact that the fighting sports fans believed that Denis will have a difficult task ahead of him, the Slovenian fighter brutally knocked Poturak out already in the first round and scored the biggest victory of  his career.

However, the celebration had another, not so bright side. While blocking a kick, Chorchyp sustained a fracture of left forearm. Right after the match, Chorchyp underwent a procedure that „solved“ the problem. The Slovenian fighter sent a message to his fans from the hospital thanking them for the support. Despite the fact that it was a routine procedure, 12 stitches will stop him from returning to trainings right away.

Having in mind Denis' big plans and ambitions to become an FFC champion which he expressed at the press conference after the event, there is a big and difficult task ahead of him.

Bekavac: I got a whiplash neck sprain and I was numb from head to toe! Luka Jelcic also ends with forearm fracture at FFC 14!