Budimir Bajbić is coming to Austria to make a statement and he will not back down! 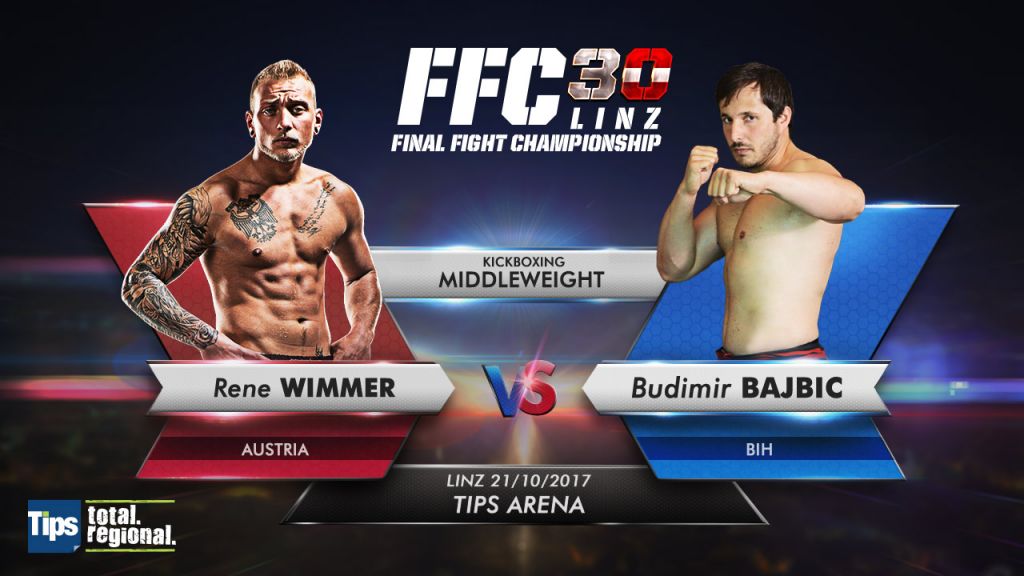 Budimir Bajbić is a new name in the FFC roster. He was supposed to make his FFC debut at FFC 29 in Ljubljana, but his promotional debut match had to be postponed due to an injury. And now it will happen at FFC 30.

At FFC 30 Linz he will square off with Austria’s Rene Wimmer who is already familiar with the FFC ring and who will fight on his own turf.

‘I will finally step into the FFC ring. I had bad luck ahead of the previous event, but it’s finally happening,’ said Bajbić.

‘I actually started with karate as a kid because there was nothing else in my hometown. As I was growing up I was drawn to the gym more and more. I started watching fights and I started to learn things myself. Some eight years ago I started practicing kickboxing and then I did some jiu jitsu for a brief period of time. My ground game was good, but I realized I prefer kickboxing and I started to compete on amateur level. In 2013 I sustained a nasty cut on my leg and I was forced to make a break for a year. After that I came back and started to fight professionally. So far I scored 7 wins and suffered one loss. This will be my ninth professional kickboxing match,’ revealed this young Bosnian fighter.

‘When it comes to inking a deal with the FFC and our cooperation, it was all in the hands of my manager Vladimir Tadić. But I think that the key factor was my win over Samuel Canonica and the first belt I won in September last year. Very soon after that I won the WMAC European championship belt and then I unified two WAKF belts in -96 and -91 kg.’

At FFC 30 Linz Bajbić will square off with Austria’s Rene Wimmer. Wimmer (15-11, FFC 1-2) is Austrian kickboxing prospect fighting out of Linz and he will again fight in front of his hometown audience at TipsArena where he also made his FFC debut in 2016 at FFC 26 when he made a real war in the ring and KO’ed favored veteran Cheick Sidibe from France. That spectacular win secured him the middleweight contender position and in December 2016 at FFC Night of Champions, he fought in a title match against Bosnia’s best kickboxer Denis Marjanović. But he lost via decision. And then again he lost to experienced veteran Aleksander Stankov at FFC 29 in Ljubljana.

‘Wimmer is not a fighter one should underestimate. He is always ready and his boxing is great. But he always pushes forward and to stop an offensive fighter like that you have to push forward too. I will definitely try to attack more and counter his attacks. I always do my best to keep my bouts attractive for the audience because I always give my maximum. I think this will be a clash of two hungry brawlers who want the same thing and think the same way!’

Budimir Bajbić will fight Rene Wimmer in middleweight and since he previously fought in heavier division, he might have it a bit harder when it comes to weight cut.

‘My preps are developing according to plan. I think I’m well prepared when it comes to conditioning and I will be strong enough. The worst part was weigh cut because I have to drop two categories. But It will be OK.’

Budimir Bajbić also revealed more about his plans for the future.

I am aware of the opportunity the FFC gave me and I want to make a statement. I have no particular future plans. I cannot make long term plans but I am open to everything. Recently i refused two fights so I could fight and prepare for FFC 30. After that I will make plans. So far, my dreams came true because I love this sports and I always try to defeat myself first, at every training session or fight, I want to prove it all first to myself so I know I learned something and made a progress.’