Aleksander Stankov: I will deliver an action packed match with Wimmer! 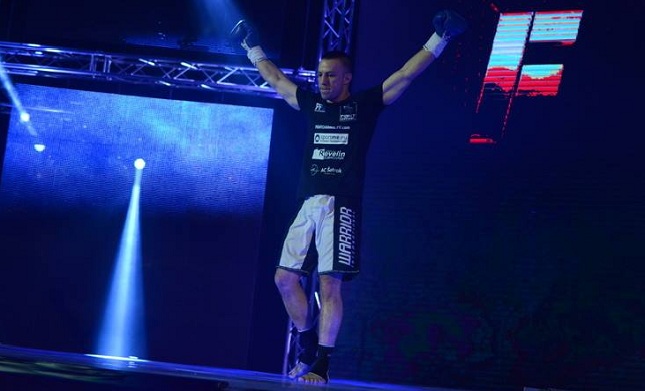 Aleksander Stankov is another fighter who is to make his comeback to the FFC ring at FFC 29, a year after a spectacular match with Karim Mabrouk in Vienna. This time the Slovenian middleweight fighter is to face former contender Rene Wimmer.

On March 18 last year, this 35 year old fight sports veteran raised the audience to their feet unlike any other FFC debutant before. No one remained indifferent to his fighting style and FFC fans will now finally get a chance to see him again in the FFC ring.

It is hard to forget your first FFC fight and real war against Mabrouk. At the end you lost, as well as the audience that deserved an extra round. What can you say about this match?

Mabrouk is a top fighter. As a big fan of K-1 I watch almost all the matches, and my job is to keep track my rivals too. I followed Karim for a long time and he is a fighter who pushes the pace more and more as rounds pass. He is the most dangerous at the very end, in the third round. He is very dangerous with powerful low kicks from the beginning. Our tactic was, first of all, to be prepared for his low kicks and block them, but not only that, I was to counter with powerful low kicks too in order to shock him and make him worry about his own leg while not letting him do what he wants to do. And secondly, I was to go slower until the third round because he has good conditioning and if you’re not prepared for that, he is very dangerous. Not only that, my plan was to fight so hard in the third round, like something he had never seen before in order to shock him and win. Maybe even finish him.

But I’ll be honest. I’m not satisfied with this match. I was very superficial, but when it comes to tactics, everything went great, I landed low kicks, he felt it and I was saving myself for the third round. When the third round started, I felt great, I had stamina, I started violently. Then I received a blow to the groin. And so, when I was given time to recover from the blow, I looked across the ring to see Mabrouk and saw him breathing heavily. I thought, go right away, do not let him rest. And here I made a small mistake, because I went back into the match with some kind of haste and I lost focus.

This was followed by something that changed it all. I was not careful and I threw a right hook, so I was opened up and I received a strong and accurate knee. My mind told me to fall, to take some time, but I said to myself: “Oh, no, you will do this and then you’re allowed to die.” But consequences were severe. Honestly, it was not only this knee, I got more than that one knee to that very same place. My guard was poor, I did not expect those knees and that was something they obviously worked on. That one knee was too much and my strength and stamina decreased. By the end of the match I was fighting both Mabrouk and myself. I did my best, but I’m sorry I did not continue with strong low kicks. I learned a lot from this match. Since that day I watch for the knees, not only in the matches, but also in training, because after that match I had a lot of problems with my rib, so Karim hit me well.

Where did you fight in the meantime and what results did you achieve?

After that match I could not fight for a while because of that rib. But after a while I first fought at CFC 2 in Ljubljana, where I won in the second round via TKO. I landed a knee to my opponent’s liver, just like Mabrouk hit me. Then I fought at IFC X in Linz, where I also won by a technical knockout in the second round.

On the account of your FFC debut, FFC leaders said they expect a lot from your match with Wimmer. Will you be able to deliver that again?

I had good and bad matches. I had fights that I am satisfied with and fights that I am not satisfied with. But at least I can say that I always did my best and I never gave in. I always wanted to be a fighter who brings a lot of action, who never draws back and who is relentless until the very end trying to win. Does not matter event if that looks bad. I can’t promise anything, but I do not give in, I have a lot of respect for FFC and believe me, I will do everything in my power to deliver an action packed match and defeat Wimmer.

Can you tell us more about your preps and your teammates?

I train at Legija Gym in Maribor. My coach is Aleš Povhe. What I like the most about him is the fact that he teaches us K-1 which I like the most and that’s just beautiful. Personally, that’s most important to me. We have a lot of members, both beginners, advanced groups and fighters. All our fighters are very good, and I know that very well because when I’m not in top shape, I have a lot of problems with them. Even when I’m in shape and I have a bad day, they beat me. And this is great because it means I have strong and good sparring partners, which is extremely important if you want to be a good fighter. I don’t want to mention any names because I also don’t want to forget anyone since we are a great team. We always push each other, compete, but at the end of the day, we are all good friends and great team. I also work with my boxing coach, Petar Makovec from Boxing Club Ljutomer. He works individually with me and helps me a lot with my preps.

Who are you outside of the ring?

Even outside of the ring, it’s all about sports for me, K-1 especially. I love it so much, I cannot imagine my life without it. Of course, one day I will be too old to compete, but I don’t even wanna think about that because I love it so much. But I can say I love being coach too. I have my own gym, Legija Murska Sobota. It’s going quite well for a small town like that, I have some 40 members which is great for such a small place. And we’re still growing. Not that long ago, some of my members started competing and that is just beautiful. They all know I do it with my heart and they give me some much positive energy back, it’s just amazing. I also do individual trainings. This sport is paying me off with so many positive things, not to mention that it saved me from loads of negative stuff.

But when it comes to me personally, I love to mess around, I see so much in little things, I appreciate everything I have in life. I respect good people, but I can be fucked up if you disrespect me. I respect the elders and I would give my life for my mom and dad. They are everything to me, together with this sport, and every day I do my best to repay them even a little bit for all they gave me.

Ivica Tadijanov back as more complete and exciting fighter! Ivan Erslan on his upcoming FFC debut: “I want people to know about us after this bout”